The Art of Recycling Enviro Show 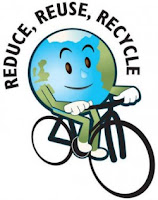 Greetings Earthlings. Like the man said: "One word.......plastics". Lou Leelyn of Lou's Upcycles joins us to talk EcoArt and transforming plastics into classics. As always we venture into The Enviro Show Echo Chamber and gawk at The Fool-on-the-Hill, as well as have a listen to the Quote of the Week and our E-Valley-uation segment, but first it's time for....Revenge of the Critters! Shakira on the rocks with angry sea lion!

This week's Fool-on-the-Hill was knocked off the Hill awhile back but we couldn't resist taking a whack at Rick Sanitarium.....err...Santorum who apparently believes environmentalism is anti-science. And to think we thought Repugnicans were anti-science. Who knew!

Our Enviro Show Quote of the Week comes from Rachel Carlson:

"Considering the whole span of earthly time... Only within the moment of time represented by the present century has one species – man – acquired significant power to alter the nature of his world."

In our E-Valley-uation segment we find that Western Massachusetts Electric Company recently finished building the largest utility-owned solar power facility in New England on Goodwin Street in the Indian Orchard section of Springfield. And this: will Green Transportation work in our ex-urban valley? Checkout Pioneer Valley Relocalization on Facebook.

In the Enviro Show Echo Chamber we scope out the New York Times piece on the Heartland Institute's plans to promote a curriculum that would cast doubt on the scientific finding that fossil fuel emissions endanger the long-term welfare of the planet."Global warming? - Not man made, not harmful". Whoa! Talk about education!

After our interview with Lou Leelyn we move to the Bus Stop Billboard:

Saturday, Mar 3, 9:30am to 10:00pm. Powershift. Meet at Court Square - The Greenfield town common, Greenfield. We, the people of MA, VT and NH will be marching on March 3rd to the Vermont Yankee nuclear reactor. We will gather in Court Square in Greenfield MA and depart at 9:30am for the nuclear plant in Vernon, VT. This is an estimated 6 hour walk for about 16 miles. We shall vigil for the remaining hour and will have shuttle services from Vernon to Brattleboro for our after party at 7pm. Contact: fungiaffinity@gmail.com

Saturday, March 3, 9:00 am to 5:00 pm. The Toxics Action Center 25th Anniversary event in Boston. The workshops are still being finalized. The key notespeakers are Lois Gibbs is the Executive Director of the Center for Health, Environment and Justice.

March 4, 2pm, Grace Church, Amherst for Alexandra Dawson's memorial service. If you would like to help the family with preparations, please respond to alexandramemorial@gmail.com. Memorial gifts may be made to Kestrel Land Trust at www.kestreltrust.org.

Sunday, MARCH 11, 12:45 pm. “IT COULD HAPPEN HERE” -- MOCK EVACUATION AND PUBLIC
FORUM ON THE ONE-YEAR ANNIVERSARY OF THE FUKUSHIMA NUCLEAR CATASTROPHE. Transportation Center, Flat Street, Brattleboro, VT. Culminating at 5:00pm at the River Garden, Main Street, Brattleboro. On March 11, one year after the disastrous earthquake, tsunami, and nuclear meltdowns in Fukushima, Japan, the SAGE Alliance will be sponsoring a mock
evacuation of Vermont Yankee in solidarity with the people of Japan. We are asking supporters who want to take part in the evacuation to meet at 12:45 pm at the Transportation Center on Flat Street in Brattleboro with their "evacuation gear." School buses will transport participants to the Vermont Yankee gates, where we will assemble with our strollers, roller bags,backpacks, and other “evacuation” items, as well as our signs and banners. We will then walk the six miles from Vermont Yankee to downtown Brattleboro. Call: 802-258-7750

Thursday, March 15 and Friday, March 16, Arise has the great good fortune to host the Walk for a New Spring. The Walkers are focused on ending nuclear war, nuclear weapons, nuclear power plants, with a special focus on the victims of Fukushima. On Friday morning, just before the Walkers leave for their next destination, we'll have a ceremony at the Connecticut River. We are looking for haikus on the following themes: protecting the river, blessing the waters, peace, anti-nuclear-- pretty broad, really. Send your haikus to michaelannb@gmail.com. And feel free to join us!

That is all. Remember: listen to your Mother!