Yet Another Climate Crisis Enviro Show 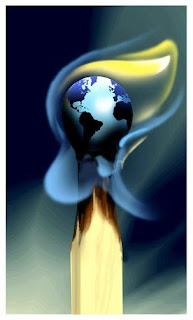 Greetings Earthlings. We return to the subject of the climate crisis once again, this time we head north with a call-in from Chris Cuomo on the impact of climate change to native Alaskans. This week we take a little more time delving into the sins of Darth Cheney and the boy emperor, as well as the presumed successor to the throne, John McSame. We'll give you the Enviro Show Quote of the Week and stop off at the Bus Stop Billboard (this time we'll take time to read the notices), but first it's time for......

Revenge of the Critters! Tree attacks golf cart! It was another one of those days on the links in Minnesota. One golfer says: “I’ve seen this happen time and time again. You make the turn after shooting a 48 and polishing off two dogs and a six pack of the Beast, when out of nowhere a tree attacks your golf cart!” One of the occupants had his leg impaled by the tree they rammed on what was believed to be drunk driving in the rough.. Hey, no one ever said there’s no such thing as payback! Get a clue: golf courses are part of the problem!

Here's our Quote of the Week:
"What is the use of a house if you haven't got a tolerable planet to put it on?"
- Henry David Thoreau

There it is again! What’s the Bush regime countdown now?? Speaking of the Dark Lord, it seems Cheney wants to drill for oil everywhere! Naturally, the boy emperor (and his would be successor) couldn’t help but....err..pipe up about it? Then, as if by plan (hmmm...) the emperor from Big Oil tries coercing Dems into opening our coastlines to Big Oil, effectively blaming Dems for the high price of oil! Is anyone stupid enough to believe him?? Big Oil already has thousands of unused leases and idle wells in the U.S.! AND, of course, the Repugnicans in Congress already showed their true colors on climate change the week before Darth, the emperor, and John McSame began their latest surge for Big Oil. Did we mention that crazy John McSame wants to build 45 new nukes by 2030?

Here's the Enviro Show Blog Bonus: checkout this video about how Big Oil fuels McSame’s not so Straight Talk Express!

The tune "Excuse me your planet is burning" by Andy Vine takes us to our interview with Chris.

Duct taped to the Bus Stop Billboard we find:

Wednesday June 25, 5:30-7:30pm, ARE "GREEN JOBS" UNION JOBS? Pioneer Valley CLC, 640 Page Blvd, Springfield. Green Jobs are all the rage now - for good reason, especially in Western Mass, where retrofitting buildings could provide a lot of jobs and we have the expertise, BUT are they union jobs? Info: Jon Weissman, 827-0301, wmjwj@wmjwj.org.


July 4. Brattleboro, VT and Amherst, MA. Ideas for float or display? Interested in participating? Handing out Info? Join Nuclear Free Vermont or CAN or a Safe and Green Town group! Call for more info Claire 413-863-8952 or cchang@nukebusters.org

Sunday, July 6, 2008, 10 a.m. to 2 p.m. PLANTS OF BARTON'S COVE. This field trip, covering about two miles, will focus on plant identification and natural history. The trail is steep in spots, so wear hiking boots or sturdy shoes. Bring a bag lunch, a hand lens if you have one, a favorite field guide or two, and perhaps a pair of binoculars in case we spot any eagles. Limited to 15 participants. Call the Hitchcock Center for the Environment at (413) 256-6006


July 30th – August 3rd . You are Invited to the Northeast Climate Confluence at Epworth Camp & Retreat Center, High Falls, NY. THE CONFLUENCE is a week long event where we will come together to share ideas and skills, strengthen our relationships, and create solutions to take care of our basic needs. There will be workshops, performances, trainings and strategy sessions about the issues affecting our communities and our planet. Call: (413) 863-6383 Or write to: northeast@climateconvergence.org http://www.ClimateConfluence.org/

That's it. Not much happening. It's summer in the Valley. Enjoy it, take a hike! BUT, remember to.....LISTEN TO YOUR MOTHER! 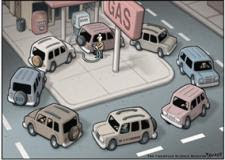 Greetings Earthlings. Jean's back! Hopefully she'll have a report from the front lines. We return to the scene of the crime with another look at fossil fuels and what’s out there to replace them. Professor George Huber, researcher at UMass Amherst’s Chemical Engineering Department joins us in the studio for a look at biofuels that don’t eat up the crops. As always, we’ll checkout the Enviro Show Echo Chamber for the latest news on the environment, and we’ll see what Darth Cheney and the boy emperor are up to, as well as give you the quote of the week, but first it’s time for......Revenge of the Critters! Sheep attacks car! OK fans, talk about a Dodge Ram. How about a VW Ram? This is a see-it-to-believe-it video version of Revenge of the Critters. An Enviro Show blog exclusive!

Here's the Enviro Show Quote of the Week: "There is nothing more important in the culture of man [and we'd add: woman]than to resist the dangers of commerce" -Ralph Waldo Emerson.

In The Enviro Show Echo Chamber we celebrate the end of the road for the Hummer. Toooo bad! Instead, according to the Washington Post, Travelers are turning to public transportation. Meanwhile, the International Herald Tribune tells us bike sales are up. AND this from Reuters: Pact needed to save biofuels (what? Crops for food, not for fuel? How last year is that??) AND finally, though we’re not big Thomas Friedman fans, we can’t help but echo some of the sentiments concerning oil prices and supplies he expressed in this piece in his New York Times column. However(and not surprisingly),Friedman left out speculators as a prime reason for the spike in oil prices. We guess millionaires may be too busy accruing to see the whole picture?

There it is again! That god-awful theme music. Glen, tell us when it’s FINALLY over! This just in: In a report long delayed by partisan squabbling, the Senate Intelligence Committee on Thursday accused President Bush and Vice President Cheney of taking the country to war in Iraq by exaggerating evidence of links between Saddam Hussein and Al Qaeda. SURPRIZE! Also, Bush regime crony says goal for rich countries to curb greenhouse gases are ”frankly not do-able for us". No? Did you check that with Darth?

Speaking of Darth and the boy emperor,“Petroleum Bonapart” by Jim Page, longtime enviro troubadour, takes us to our interview with George Huber. Word has it that his daughter will be sitting in with us so we'll try to behave like adults......maybe.

Then we'll browse the Bus Stop Billboard for the latest:


Wednesday, June 11th, 2008 from 7 - 8 PM. CITIZENS UNITED FOR A HEALTHY FUTURE GENERAL MEETING. Toxics Action will be giving a presentation on Zero Waste in the Social Room of the Unitarian Society, 220 Main Street, Northampton (please walk down the driveway and use right side door, the meeting is downstairs). The proposed Northampton Regional Landfill expansion over the Barnes aquifer threatens the public drinking water supply in our area. If it goes forward, it would exempt a landfill in a Water Supply Protection District for the first time in Massachusetts.


June 20-21, TAKING CHARGE OF OUR ENERGY FUTURE. UMass Amherst Campus Center, Amherst, MA. The Summit will be a hotbed of activity helping to create a network of thriving local communities - urban and rural - working together across race and class -building a way of life and an energy future that is sustainable and just.


Wednesday June 25. 5:30-7:30pm, ARE "GREEN JOBS" UNION JOBS? Pioneer Valley CLC, 640 Page Blvd, Springfield. Green Jobs are all the rage now - for good reason, especially in Western Mass, where retrofitting buildings could provide a lot of jobs and we have the expertise. But not everyone is talking Green Jobs as Union Jobs and the possibility of Scabby Green Jobs looms large here. A Working Group on the Green Economy will discuss the issue. Info: Jon Weissman, 827-0301, wmjwj@wmjwj.org.


So much for this week. Next time it's Chris Cuomo with some climate crisis observations from way up north. Until then remember: listen to your Mother!