Greetings Earthlings. We return to the subject of water here on the all wet Enviro Show, this time with a view toward its’ imprisonment. Cleo Woelfle-Erskine, editor of the book "Dam Nation" calls-in to comment on "dispatches from the water underground". We return to the machinations of the evil one, Darth Cheney and his minions. Also, we’ll checkout the Enviro Show Echo Chamber, but first it’s time for....Revenge of the Critters! Mum KO’d by sweet-toothed giraffe. Is it a tall tale?

Colleen Kattau's "Ocean Song" from her recent "Inhabited Woman" release takes us to the Enviro Show Echo Chamber. We rerun this recent story from Grist: Park Service rules allow 540 snowmobiles a day into Yellowstone. Watch out Yogi Bear! And D.O. reads his recent letter to the Valley Advocate concerning those corporados at Nestle and their designs for the Montague aquifer. Your Enviro Show Blog Bonus finds The Pedal People in action on the street in Northampton!

There's that theme again! Glen, what’s the countdown today? How much more evil can we endure?? OK, the Empire continues its War against Nature. Rep. Henry Waxman reveals DOT officials and White House lobbied against California's vehicle-emission standards. ALSO, the Empire puts on a climate dog & pony show, fooling no one but the dwindling faithful few, after the boy emperor skipped the recent UN climate talks. The good news is that the people are NOT amused. Protests [1],[2] at the State Department, where the show took place, stirred the climate crisis pot last week. Go to: http://www.climateemergency.org/ for more details.

Then we move on to our interview with Cleo Woelfle-Erskine, editor of the book "Dam Nation". Dam Nation combines environmental victories in the sustainable use movement with hands-on, participatory options for country and city dwellers. Not just a "how-to" but a "why-to" book.

Finally, as usual, we go to the Bus Stop Billboard:


Thursday, October 4 from 5:30-5:50 pm. Anti-nuke demo! The Vermont State Nuclear Advisory Panel returns to Vernon to address the public's concerns about the August 21st cooling tower collapse at Vermont Yankee and the ensuing mishaps which caused an emergency shutdown of the reactor. "Is Vermont Yankee safe?" is a question raised by people throughout the state. Go to the main entrance of the Vernon Elementary School, 381 Governor Hunt Rd. Just over the line in Vernon, VT. Call CAN: 413.339.5781 or 413.834.3280.

Tuesday, October 9, 7 - 8:30 p.m. THE CONNECTICUT RIVER: SOURCE TO SEA. Dr. Elizabeth Farnsworth, Naturalist and Author who has paddled and researched the entire river, will offer an introduction to the river that will include a slide show. She will be available to sign her new book following the program. Proceeds from book sales benefit the Connecticut River Watershed Council. Call: (413) 256-6006

Saturday, October 13, all day. Unplug America! The “Unplug America” campaign was introduced by Indigenous Peoples in 1992 in response to the 500 year anniversary of the arrival of Columbus to the Americas. Unplug Day is an invitation to all people to show our love and respect for Mother Earth by challenging unhealthy patterns of consumption and the continued production of poisons that destroy our environment. October 13th is a day to unplug – turn off the TV and radio, shut off the taps, and leave the fossil-fuel burning vehicle at home! Instead, take a walk with friends and family, tell stories, do something artistic, and say a prayer for Mother Earth and our communities. Call 928-214-8301

October 20-22: No War, No Warming is calling for a massive intervention in Washington, DC, with solidarity actions around the US and internationally. On Saturday and Sunday we will be organizing trainings in D.C. for nonviolent direct action / civil disobedience and holding spokes council meetings to plan and coordinate our actions. Go to: http://www.nowarnowarming.org/


There. You're done with the likes of us 'til next time. Until then, remember: listen to your Mother!

Greetings Earthlings. We hope to have Robert F. Kennedy, Jr. on the phone to talk about the Cape Wind project that mainstream enviros are attempting to ram down our collective throat. We’ll go right to the interview at the top of the show, after which we’ll submerge ourselves into the troubled waters surrounding this popular privatization scheme. Later, we’ll open the phone lines and get your opinion and have a bit of ..err...back-n-forth? Speaking of uncertain phone calls, we may get another from David Kroodsma, celebrating the finish in the first leg of the Ride for Climate.

Then, of course, it's time for the...Revenge of the Critters! Great White tries kayak for lunch! You can tell there's a nautical theme here, right?

Next, Robert Lucas' "Green Energy Blue" takes us to our Cape Wind free-for-all! We'll take a whack at the Massachusetts Ocean Act (S.2281) and its’ assault on the long-standing Massachusetts Ocean Sanctuary Act. Also, Greenpeace spins with the worst of them! AND, deeper water windmills? Sounds like their getting’ in over their heads to us! D.O. takes a piece out of Mass Audubon’s ambiguous position on Cape Wind. Then it’s time to open the phone lines and talk about industrial seascapes! WARNING: Everyone on this show thinks Cape Wind SUCKS!

In The Enviro Show Echo Chamber we have this piece from Grist (lifted from Reuters) on the U.S. Navy’s War on Terrorist Whales (told you there was a nautical theme). By this time in the show David may call from the other coast and scold us for our stand against Cape Wind. We'll see.

Wednesday, September 19, Cast Your Vote to Restore Constitutional Protections during the National Call-in to Congress! Restore Habeas Corpus! Restore the Fourth Amendment! Go to: http://www.bordc.org/ or call both your Senators and your Representative at 202-224-3121.

Friday, September 21 at 4:30 PM on WMUA 91.1FM and on September 27 at 8 AM on Valley Free Radio 103.3. Writer's Voice: A Forum-on-the-Air on Local/Corporate Control of Our Water. Nestle Corporation is considering building a new bottling plant somewhere in Massachusetts. It could be sited on the Montague Plains and draw its water from that aquifer. Spend the hour live with Alan Snitow, co-author of THIRST: Fighting the Corporate Theft of Our Water . Snitow produced the film documentary, Thirst, which was aired by PBS. Call into 413-545-3691 during the MUA show with your questions.

Tues, Sept 25. Protest Bush's visit to the UN in New York City. A group of activists from New York City such as Code Pink, WILPF, WRL, ACT UP!, are coordinating what is hoped will be several days of antiwar events and actions in protest of Bush's annual visit to address the UN General Assembly. http://nyc.worldcantwait.org, jonathanbrownnyc@yahoo.com, Call 917-776-4927

October 20-22, No War, No Warming, is calling for a massive intervention in Washington, DC, with solidarity actions around the US and internationally. On Saturday and Sunday we will be organizing trainings in D.C. for nonviolent direct action / civil disobedience and holding spokes council meetings to plan and coordinate our actions. The intention of No War, No Warming is to hold Congress accountable and show the world that we will not sit still; we will hold an intervention by taking over Capitol Hill on a day that Congress is in session. See: http://www.nowarnowarming.org/

We go out with "Like a Wave", by Wildman (there's that theme again!). That's it. Remember: listen to your Mother, ok?

The Greening of Noho Enviro Show 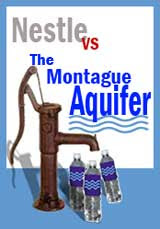 Greetings Earthlings, we trust you’ve recovered from the labors of the day. It’s the One Thousand Five hundred thirty first anniversary of the fall of the Roman Empire today! We’ll see if what goes around comes around. Lynn DiTullio of the River Valley Market Green Team comes to these microphones with news of the new green building going up out on the north end of King Street for the River Valley Market co-op, and Chris Mason, the new Northampton Energy officer joins us to envision a greener Paradise City for the future. As usual, Amherst’s David Kroodsma calls in from the Ride for Climate. Speaking of empire, we return to chilling subject of Darth Cheney. We’ll celebrate the fall of Enemy of the Earth, Larry Craig, AND we delve briefly into the Enviro Show Echo Chamber, but first it’s time for......Revenge of the Critters! We read another episode of Bambi’s Revenge AND link to our first video edition: The Buck Stomps Here!.

OK, things are still heating up in Montague as citizens rise-up to protect their water rights. Posters are going up and chat rooms are filling up as folks prepare for the next steps in resisting the corporados from Nestle who have set their sights on the Montague Plains aquifer as a source for a corporate water bottling operation. We’ve put the latest info up on our blog, but for tonight we’re just asking you to pen a letter of protest [see sample] to the Mass Fish & Wildlife Board who manage the Montague Plains Wildlife Refuge and fax it to (508) 389-7890 or mail it to: One Rabbit Hill Road, Westborough MA 01581. Tell them the Board should re-affirm its policy and indicate that Nestle cannot use public resources for private gain. The Board’s mandate is clear: preserving lands and water acquired for biological resources and habitat protection. Talking points are posted on the MontagueMA.net website.

In the Enviro Show Echo Chamber we note the just passed second anniversary of Hurricane Katrina with this encouraging story from the LA Times.
Of course, the fall of Repugnican Senator Larry Craig was all over the news this past week, but let’s have a look at what WASN’T reported: the guy’s awful environmental voting record!

Pink Floyd's "Signs of Life", reminds us there’s signs of life in the old quarry out on the end of King Street. We do our interview with Chris Mason, Energy Officer for Northampton and Lynn DiTullio of the River Valley Market Green Team.

Glen! There’s the theme, what’s the count?? Let’s checkout Scott Ritter’s thoughts on Why Cheney really is that bad. We couldn’t agree MORE!!

Finally, it's on to the Bus Stop Billboard:

Thursday, September 6, 6:30 p.m. Paul Jahnige, Director of Massachusetts Department of Conservation and Recreation’s Greenways and Trails Program will be speaking at the Edwards Library on East St. in Southampton.

Saturday, Sept. 8, 10 a.m. to 5 p.m. NON-VIOLENCE TRAINING. Edwards Church, Main St., Northampton, Mass. Facilitators include: Peggy Anderson, Jo Commerford and Paki Wieland. A day of non-violence training will include reflections on theory and on our place in the rich history of alternatives to violence. Of course this might come in VERY handy if you're planning to confront the war machine in DC or say, Nestle on the Montague Plains?? To register please email Peggy at panderson@gogtt.net or Paki at pakiw@aol.com.

Saturday, September 15, 10 a.m. to 4 p.m. Amherst’s Energy Conservation Task Force presents its 3rd Annual Renewable Energy Fair. On the Amherst Town Common. Free and open to the public; please join us for a day of resources, information, and presentations designed to help you lead a more sustainable lifestyle.

Also, Saturday, September 15, all day, March on Washington,DC. End the war now! Protesting is not enough. Come for the rally, stay for a week of direct action. For local bus info call Tristan at 508-517-3864.

Wednesday, September 19, 7 - 9 p.m. Late Summer Insect Concert! Late summer evenings are wonderful times to listen to the many varied sounds made by grasshoppers, crickets and katydids. We’ll spend some time indoors with images and virtual calls and then go outside to listen. Hitchcock Center for the Environment, 525 South Pleasant Street, Amherst, MA. Register at (413) 256-6006

We'll go out with Dar Williams' "The end of the summer". So much for the likes of us. Stay tuned for more rabble rousing in the near future; same bat channel, same bat time! And remember: listen to your Mother!!