Greetings Earthlings. The Enviro Show would like to encourage everyone to visit or call BP gas stations in the Valley (or in your region) and encourage the owner to change their franchise to Citgo, Sunoco, or some other less criminal brand of oil & gas. Some are doing it already! It's another way to express your concern (and outrage!) about the catastrophic BP disaster in the Gulf region, the worst man-made environmental disaster in U.S. history! As you may know, BP stations are not actually run by that criminal corporation, but are franchised to local owners, your neighbors. So please be respectful and friendly (maybe offer to help them switch!). Of course, if you are not satisfied with the owner's response, you can always organize a vigil or protest on public property adjacent to the gas station! Thanks and please pass this message on. 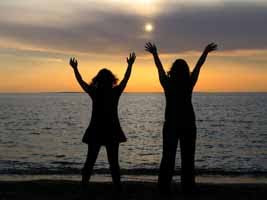 Greetings Earthlngs. It's that time of year again: Summer Solstice, time for the fire festival. Happy Midsummer Eve! O, guess what? IT'S RAINING OIL IN LOUISIANA! Our in-house pagans, Laura & Penny return to (ahem!) enlighten us all. Also, roving reporter (and Bardic Insurgent) Tom Neilson calls in from the U.S. Social Forum. And, a call from Mike Howells, an activist from New Orleans with his finger on the pulse of what's going on with grassroots response to BP's crimes against the planet. As always, we'll scope out the news in The Enviro Show Echo Chamber, as well as locally in our E-Valley-uation segment where we introduce (fanfare please) our very first Annual Enviro Show Big Green Clear Cutters Award!, but first, it's time for......Revenge of the Critters! Gardeners beware! It's the Attack of the Killer Mutant Leek Moths!

OK Enviro Show fans, let's get right to it: here in our E-Vally-uation segment we present the Annual Enviro Show Big Green Clear Cutters Award! This award goes to out to someone who professes to be "green", but who actually is a sort of mottled crud gray with brown streaks. OK? Are you ready? The envelope please............this years Annual Enviro Show Big Green Clear Cutters Award goes to the Massachusetts Sierra Club's Elisa Campbell!! Elisa is receiving the award for her recent vote at the Quabbin Watershed Advisory Committee to continue clearcutting in the Quabbin watershed. What's that you say? The same Elisa Campbell of Mass. Sierra who is a proponent of nukes and developments? You are correct! Now for the VERY good news on our local Biomess: Manomet Study confirms activists warning: Biomass incineration worse than coal! (OK, so the Post story says zip about about activists but......WE TOLD YOU SO!)

"Oil and water don't mix" by Recycleman & the Dumpster Divers takes us to the Enviro Show Echo Chamber where Robert Reich reminds us that BP is not a person (you know, like D.O. is?....sort of?). And this:....Big Oil eats its young: BP thrown under the bus. However, Big Oil's friend Rep. Joe Barton fell all over himself to....are you ready? apologize to BP! No apologies from Diane Wilson though; she got in BP honcho, Tony Hayward's face at those hearings in DC. Hey! Speaking of apologies, what's all this self-flagellation about us oil-consuming commoners being part of the problem? It's not like we're given many choices on transportation and alternative fuel by the corporados, right? Stop beating yourself up! Also, remember the International Whaling Commission is meeting to discuss the resumption of whaling? (can you believe these people??). Why not be one one in a million and say NO WAY! Finally, speaking of driving critters to extinction, how about defending the lions!

[Our interview with Mike Howells covered a lot of ground as to grassroots action in Louisiana. If YOU want to get involved down there contact them here: gulfemergencysummit@gmail.com PHONE: 504-644-7214]

In our Meet the New Boss segment the group, Seize BP responds to Obama's speech from the Oval Office on the BP/Haliburton crime against the planet. Also, checkout our own Rachel Maddow's fake president speech to the nation!


June 22-26. U.S. SOCIAL FORUM , Detroit. The US Social Forum is a very special kind of gathering. It isn't a conference with an agenda and a program of events; it's a convergence of movements, communities, and cultures whose participants produce their own agenda and programs. It is a MOVEMENT BUILDING process. It is a space to come up with peoples’ solutions to the economic and ecological crisis. Info: http://www.ussf2010.org.

Monday, June 28, 6:00-7:30 p.m. DEP public hearing on the scope of the C&D study for the proposed Biomass incinerators. John F. Kennedy Middle School (Cafeteria) , 1385 Berkshire Avenue , Indian Orchard. C&D incineration will remain under consideration as an energy source despite the outcome of the ballot initiative because it can be a very profitable industrywithout tax credits due to tipping fees. The Manomet study only addresses virgin wood.Call (617)292-5500 for more info.

That is all. Another incredible week on Planet Earth. Soooo, remember when you're out there: listen to your Mother!

Greetings Earthlings. It's confirmed: BP stands for Biological Predator and we here on The Enviro Show are calling for the Predator's head, especially given that it's World Oceans Day!. We'll be covering the latest horrors from the Gulf in the Enviro Show Echo Chamber and our Meet the New Boss segments as well as field a call from Scott Eustis of New Orleans Critical Mass (and a fisheries scientist), but first it's time for....Revenge of the Critters! We love this one. Croc attacks chainsaw!

The Enviro Show Quote of the Week calls for another trip in the Wayback Machine:

“Let us not flatter ourselves on account of our human victories over nature. For each such victory nature takes its revenge on us. Each victory, it is true, in the first place brings about the results we expected, but in the second and third places it has quite different, unforeseen effects which only too often cancel the first.”

In the Enviro Show Echo Chamber we start with a excellent piece from Democracy Now! on the BP Gulf mega-disaster. Then we follow-up on Grist's Six Reasons Not to trust BP. What? Only six!! Of course, BP is putting as much, if not more effort into corporate image damage control, obfuscation,outright cover-ups, and media blackouts than into plugging the f'ing catastrophic leak! O, and about those toxic dispersants making everyone sick. So, how to respond? Some folks want the Feds to Seize BP and place it in "a trust, in amounts proportionate to—and sufficient to fully compensate for—all projected harm from its dangerous and reckless acts in pursuit of super-profits". Here on the Enviro Show we say: OFF WITH BP's HEAD! (which is a not so polite way to call for revoking their charter), but why stop there? Let's throw them in jail! Naturally, there are tons of protests out there to plug into.

In our Meet the New Boss segment we review the fact that BP and Obama already had a cozy history. O, did we fail to mention that the White House is thinking about setting the clock alllll the way back to the disgraceful practice of commercial whaling?

After our interview with Scott Eustis we'll stroll over to the Bus Stop Billboard:

Wednesday, June 9, 4:15-5:30 p.m. A public rally in support of clean air and a healthy planet will be held at Pynchon Park on the corner of State and Chestnut Streets, next to the main branch of the Springfield Library immediately prior to the Department of Environmental Protection’s hearing on the Global Warming Solution Act. A press conference will be held at 4:30 p.m. at the same location.

June 19, 10:30am to 7 pm. 6th Annual Sustainable Energy Summit 2010 at Nuestras Raices' farm (La Finca) at 24 Jones Ferry Road in Holyoke. Come to the Summit and see all the important work that is happening to help individuals and communities reduce their energy use and costs, use more renewable energy, strengthen their local communities, and build our movement for a just and sustainable future in our region. Contact: Diane Crowe, Summit Coordinator. 413-772-8898 summit@cooppower.coop


June 22-26. U.S. SOCIAL FORUM , Detroit. The US Social Forum is a very special kind of gathering. It isn't a conference with an agenda and a program of events; it's a convergence of movements, communities, and cultures whose participants produce their own agenda and programs. It is a MOVEMENT BUILDING process. It is a space to come up with peoples’ solutions to the economic and ecological crisis. Info: http://www.ussf2010.org.

OK, did you remember to BOYCOTT BP and ARCO (O, and Exxon/Mobil and Chevron and Shell and...)? How about organizing some protest? Remember: it's the WORST environmental disaster of its kind EVER! Like we say: better listen to your Mother!