The Enviro 2006 Rites of Spring Show

What a week! You name it: say hello to the new boss at Interior, same as the old boss [except maybe Kempthorne wasn't in the sack with Abramoff, but hey! ya' never know!]; new nukes globalization [Jean will have more on that]; ANWAR provision passes in the bust-the-budget bill; Russ Feingold goes after King George here and here; more bad news on the global meltdown; and a perhaps brief reprieve for the so-called Clean Air Act. BUT, in spite of all that, another vernal equinox is upon us: IT'S SPRING! With that in mind [and with any luck] Tamara, our resident witch will be joining us to get on with the rites of spring. Later in the show, former Northampton Conservation Commissioner, Joanne Montgomery will join us to talk about the DPWs beaver eradication program.

Nuclear madness! Jean tells us about the new corporate-global push for the next generation of nukes; PLUS: what's up w/the Vernon nuke? Dare we ask?? We'll play a cut from Tom Neilson's just released disc titled "Fools no More". The tune, appropriately is called "Just a little meltdown". Tom is joined on the cut by Kat Allen and Derrik Jordan.

On our Bus stop billboard there are still anti-war events happening. Checkout WMass Indymedia here or WMass AFSC here. March 28 is the anniversary of the Three Mile Island meltdown. CAN has some events planned w/that in mind:

NRC will presen the county on relicensing of Vermont Yankee. Come and express your concerns about the NRC dog and pony show.
****

To commemorate the accident at the Three Mile Island nuclear reactor in Pennsylvania, there will be a walk from the Brattleboro Commons to Entergy's corporate headquarters. The walk will begin at 10 AM. This is the 27th (3 cubed) anniversary of Three Mile Island accident which started at 4 AM, March 28th, 1979 near Harrisburg, PA.
Entergy Corporate Headquarters

12:00 PM
There will be a rally and action at Entergy HQ, on Old Ferry Rd. in Brattleboro, VT. 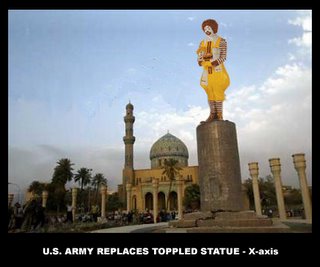 We’re closing in on the anniversary of the Bush regime’s illegal and highly immoral invasion of Iraq so we took a look at the ecological impacts of war and the filthy war machine itself. We screwed up w/the recording of a talk Ray Shadis gave in the Valley recently. D.O. thought Shadis, Staff Technical Advisor for the New England Coalition on Nuclear Pollution, had spoken about depleted uranium (DU) when in fact his talk was all about the bogus Vernon nuke. For DU info checkout Traprock's page here. We'll be doing another show on the nuke issue soon. Checkout that scarey disaster zone map Jean spoke about here.

So, war, what is it good for? You know the tune: We’ll it’s great for business, right? That is if your business is munitions or like, Dick Cheney’s Halliburton, building and supplying military bases and infrastructure. We’re talkin’ former president Eisenhower’s dreaded "military-industrial complex" here. But if you happen to be just plain folk, war will tear your world apart. From Sherman’s torching a swath through the South, to the trench warfare of WWI, to the leveling of civilian cities like Dresden or Hiroshima, war may be the greatest ecological disaster ever conceived by the human mind. We had a look at the Bush regime’s footprint on Iraq and elsewhere.

Then it was on to the just plain day-to-day Earth trashing done by the Pentagon. The U.S. Department of Defense is the largest polluter in the world, producing more hazardous waste than the five largest U.S. chemical companies combined. The types of hazardous wastes used by the military include pesticides and defoliants like Agent Orange. It includes solvents, petroleum, perchlorate, lead and mercury. And most ominously, depleted uranium. Health problems that have been documented with regard to these various toxins include miscarriages, low birth weight, birth defects, kidney disease and cancer. Military pollution most directly affects those who are targeted by our weapons, soldiers and anyone living near a military base, both in the U.S. and abroad. In the U.S., one out of every ten Americans lives within ten miles of a military site that has been listed as a Superfund priority cleanup site. Also, given where chemical and nuclear weapons are used, tested, manufactured, stored and disposed of, the burden of health impacts and environmental destruction falls disproportionately on poorer communities, people of color and indigenous communities. Women face particularly severe problems because of their sensitive reproductive tissues and children because their immune systems are not yet fully developed.

The US Military is responsible for generation of over one-third of the county's toxic waste. Millions of acres of US Military property are being environmentally cleared for transfer to local communties. These environmental clearances are often completed with a total disregard for human health and the environment. Ok, Valley people, let’s talk about Westover Air Base in Chicopee. The folks from Isis who’ve been looking at this will be on a future show, but here’s some of what they’ve found:

The U.S. Air Force (USAF) opened Westover Air Force Base in Chicopee, Massachusetts in 1942. The Base served as a Strategic Air Command facility from the mid-1950's into the early 1980's when its mission shifted to USAF Reserve. Today, Westover continues to operate as the world's largest Air Reserve Base and as Tactical Wing, and is one of the country's two centers for Galaxy C-5A military transport aircraft. Fifty years of military operations at Westover have created a complex set of hazardous waste sites. USAF has identified over two-dozen sites on the active Base and on nearby Formerly Used Defense Sites (FUDS) that were sold off as the Westover has downsized.

For many years, residents in surrounding communities have voiced concerns about Westover's environmental impacts through meetings, surveys, and letters to public officials. Their concerns include potential for soil and groundwater contamination, noise, health risks for residents and cleanup workers, and impacts on the environment and several endangered wildlife species. Community interests include timely and impartial data review and expanded public involvement in the decision-making processes. We'll learn more about this when the folks from Isis join us in the near future.

In the Old news is NOT no news department:
Remember the “good news” about Big Mountain we went on about in a previous show? Turns out to be not so good. Peabody coal may continue trashing Black mesa and traditional Navajos may be kicked off their land to boot. Checkout: http://www.blackmesais.org/what_can_do.htm

Also, during our previous critters show we ran out of time before notifying you about a critter problem for the highly endangered North Atlantic Right Whale. The U.S. Navy in its "infinate wisdom" wants to perform sonar tests off the North Carolina coast that will place the migrating Rights in additional danger. See what YOU CAN DO.

NATIONAL WEEK OF CAMPUS ACTION
Students Say NO to War in Iraq! College Not Combat, Troops Out Now!
Students will hold events at high schools and colleges around the country
demanding an immediate end to the occupation of Iraq and money for young
people's education, not military recruitment. This week of action leads into
the global days of protest on March 18-19, where students will join many
others in marking the anniversary of the invasion of Iraq and demanding to
bring the troops home now! Info: mailto:RecruitersOut@yahoo.com,
www.campusantiwar.net.

Sunday, March 19, 6:00-7:00 p.m., downtown Northampton.
We will hold a community-wide candlelight vigil for
people to mark the anniversary and express some of
their feelings.

No Go Solo is an eight-day publicity campaign, from
March 13-20, to combat the culture of single-occupancy
automobiles and to encourage the alternatives of
ridesharing, public transportation, and bicycling.
Details forthcoming at a dedicated web site:
http://www.nogosolo.org

Finally, here's that LINK on the Roadless Area Conservation Act that Jean was talking about. We be covering this and other news on a forest issues show in the near future.