Jean’s back? Well, she apparently brought back airline cabin fever from her frontal assault on the WTO in Hong Kong so we won’t know ‘til the last minute if she’ll be sitting in. Phone-in from the sick bed? Stay tuned.

We started last August with the sounds of the swamp that Ed captured. Giving voice to the voiceless, no? Well, sort of. We bashed you over the head with rants on climate change just as Katrina was bearing down on the Big Easy, reminding you that it’s really "just a theory"; you know, like Jor-al and his crazy ideas on the fate of Krypton.

Before we knew it, Halloween was upon us and we came up with a list of really horrific enviro woes like WALMART!!; the Bird Flu; and a bunch of yucky stuff no one can remember, like the Mt. Tom coal-burner or alleged Intelligent Design (why would anything intelligent design a Bill O’Rielly?). Given the season we thought it best not to do the show LIVE! Sooooo, we pre-recorded our Halloween special so’s we could do (ahem!) OTHER things around Halloween, but we made sure to remind everyone that their children are "Born as ghosts".

Then it was on to a healthy degree of toxic exposure; leaky old nukes (V-e-r-n-o-n N-u-k-e...remember?) and endless Bush-bashing. But no one can bash Bush like RFK, Jr. so we thought we’d..er.. cap-off? the year with an excerpt from his excellent "Crimes against Nature" speech given at the Commonwealth Club in San Francisco (we know: the Commonwealth is here, yes?).

On the Bus-stop Bulletin Board we have an important hearing on climate disruption in Massachusetts coming up on the 17th in West Springfield. It's your chance to vent on Romney's minions for bailing on the Regional Greenhouse Gas Initiative.

Hey, here's a piece posted on the WMass Indymedia site by Daniel Shays about Gov. Mitt and his ongoing lame-ass approach to climate disruption. And you thought Massachusetts was a green state!

Today Governor Romney failed the citizens of Massachusetts yet again by bailing on the Regional greenhouse Gas Initiative(RGGI) that all other New England states, save Rhode Island, signed onto yesterday. The pact calls for freezing power plant emissions and then reducing them by 10 percent by 2020. Many feel that Romney’s initial support, more recent backsliding, and his final rejection has everything to do with presidential politics. The RGGI was scheduled for its debut at the Climate Change summit in Montreal last week, but Romney's objections concerning costs to industry prevented that announcement. In essence, the governor has done just what the Bush regime did at the talks: created roadblocks and put rightwing politics before the planet. Romney contends that Massachusetts' own plan to reduce greenhouse emissions from the state's six dirtiest power plants (most of which are called "The Filthy Five") would make Massachusetts the first state with carbon dioxide limits. His plan however includes thresholds allowing power plants to exceed emission limits if the cost of controlling them is too high for the industry. Always a friend to the corporados, it’s hardly surprising that the governor would defer to the bottom line.

According to the DEP’s website, a western Massachusetts public hearing will be conducted to receive public comment, both oral and written, on the proposed regulation on Tuesday, January 17, 2006 at 6 pm at the Best Western Sovereign Hotel,1080 Riverdale Street in West Springfield. This seems like an excellent opportunity to let the governor and his minions know how you feel about putting politics before the planet. The results of climate disruption caused by industry in the U.S. and filthy power plants like the Mt. Tom coal burner in Holyoke is the sorry legacy we leave to our children and grandchildren. It is our duty to everything in our power to lessen the impact upon future generations caused by our over-consumptive and wasteful lifestyle; a destructive way of life that is encouraged and enabled by corporations, utilities and governments like the one headed by Mitt Romney here in the so-called Commonwealth.

We are psyched for the season. Tamara sits in for Jean and rings in the Winter Solstice. Jean's off to India for more tree hugging. WATCH THAT WRIST JEAN!
Then we endure D.O.'s annual homage to Marley's Ghost (can't he be happy just shopping??) No way! We continue our grinchy trashing of the holiday shopping frenzy and over-all over-consumption in the Land of the Fatties. Happy Holidaze!

Then it's on to the answers for the Enviro Show's Question of the Day that we asked at the "Stroll-in on Climate Disruption" on December 3. Recall that was the International Day of Action on Climate Change? Well it must've been a BIG success 'cuz the streets of Northampton were FILLED WITH STROLLERS! Strangely though, no one brought any signs!!

Tom Neilson will be joining us to help put the glow in the show with live music on the joys of nuclear power. Like a bent fuel rod in an overheating pool of light water, Tom's tunes have a way of escaping into the atmosphere. Remember dear listener: nukes know no borders. You sure you don't want to SHUT IT DOWN??

Also, Debby Katz of the Citizens Awareness Network joins us for the lowdown on that leaky old Vernon nuke and its potential to give you the most radiant holiday you'll ever know. Deb rocks the region with seemingly endless energy directed at shutting down the enemies of the Earth. If it's about nukes,Deb knows it. Do not miss this interview.

Finally we visit the Bus Stop Bill Board (formerly the Bulletin Board but that sounded awfully boring!) for upcoming events like "Alternative Energy - Where do we go from here?". And, for our fellow pagans out there and in honor of the Solstice, we close with Dar Williams' "The Christians & the Pagans"; a real hoot. HAPPY HOLIDAZE! 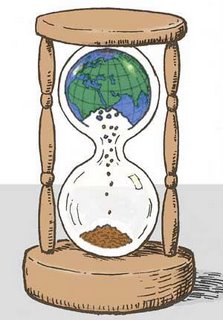 On Saturday, December 3 at 1pm on Main Street in Northampton the hosts of WXOJ-LP Valley Free Radio's Enviro Show will be observing the International Day of Action on Global Warming with a local call to action. A "Stroll-in on Climate Disruption" invites parents, grandparents, aunts, uncles and future parents to promenade up & down Main Street with strollers, rollers, and whatever moves you (don't forget signs against climate change!) in an effort to further the growing campaign against global warming. We'll be on hand to interview participants for the show and to award a prize for the most creative stroller or roller.

The event is part of the international grassroots effort to stop global warming and the “Climate Crisis, USA Join the World!” campaign calling on Washington to GET REAL and sign the Kyoto protocol on climate change. From November 28 to December 9 representatives from over 150 countries will be meeting at a major United Nations Climate Conference in Montreal. We can add our voices to the growing cry for sanity. The health and well-being of our children, grandchildren and all inhabitants on planet Earth depend on us.

For more info email us at: enviroshow (at) valleyfreeradio.org
Also see: www.climatecrisis.us
Posted by D.O. at 3:59 AM No comments: