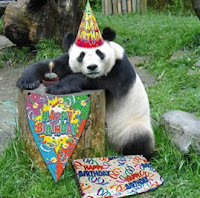 Greetings Earthlings. We've been acting out about the Climate Crisis and the War Against Nature for well over a decade now and we realize like many 12 year-olds we can be annoying at times, right? (Checkout our very first show blog HERE). In any case, would you like to come to our B-day party? David Detmold is coming, back from his Bike for Standing Rock trip. We'll have cake and party favors and we'll hold a treasure hunt to find our Fool-on-the-Hill and The Mad King, as well as fun and games in the Enviro Show Echo Chamber, but first it's time for........Revenge of the Critters! Your pet may have fleas but you better hope you don't run into "sea fleas" this summer.


Let's play Pin-the-Tail-on-the-Mad-King at our birthday party, OK? The first pin is for the "1,000 lies" His Malignancy told in "200 days". Ouch! Pants on fire!!  Wait, lets stick this pin in his pants: The Mad King Kills Study of Mountain Top Removal. Of course there's always plenty of pins for his ongoing war on science. And this: Just in time for hurricane season His Malignancy revokes an Obama rule on flooding. It will be hard to pin this one on The Mad King 'cuz it's a moving target, but hey, give it a try. OK, are you ready for another moving target? Stick a pin in His malignancy's fascist infrastructure scheme! Maybe we should start a new segment like Headlines We Wish We Wrote? Try this: "Trump Staffer Responsible for Finding Positive News Stories Resigns". Finally this: