The Climate of Crisis Enviro Show

Whoa! The anniversary of Katrina just behind us, the anniversary of 9/11 just ahead (be very afraid: vote Repugnican!) and the start of Camp Democracy TODAY! Our glass of woes and resistance runneth over. Our friend Paki joined us...sort of, to tell of her very recent experience running a donated truck down to the Big Easy. We had a call-in from Camp Democracy in DC, but first.....It's time for Revenge of the Critters! Yes! Yellow jacket nests as big as a Volkswagon!

Then Tom Neilson joined us for a radio debut of his yet to be recrded tune "Greenland's melting to the sea", which reminds us that we called this the Climate of Crisis Enviro Show 'cuz not only is the planet's climate in chaos due to industrial civilization, but the civilization itself is a crisis, much of due to the fearful destructive policies of the Bush regime. We had just a few examples (who can take more than a few??):

1) Did you think the crisis in Lebanon was over? ERRRR! There's the buzzer! Sorry, wrong again! The ecological disaster resulting from the Israel bombing of a Lebanese power plant, spilling 10,000 to 15,000 tons of heavy fuel oil into the Mediterranean Sea, continues. This from Grist.

2) Soooo, there was too much water in New Orleans last year, and too much in the Northeast this year, but guess what: there's nooooo water in the plains.

3) Closer to home where we have a potential nuke crisis hanging over our heads: Vermont Yankee gets some bad news for a change.

4) Now, for some good news: in response to butt-ugly U.S. kar kulture students at MIT are Breaking the Gas Ceiling! AND, more good news from the Other Coast....kind of.

Then we moved on to our report on the situation down in New Orleans from one of our favorite Raging Grannies, Paki Weiland. It's a crisis of governmental imcompetence down there friends, in the richest nation on Earth. Through the magic of the ancient cassette recorder Paki gave us her impressions while she's actually in another state! Then we heard from David Swanson at Camp Democracy

Tuesday, September 12, All Day. Climate Crisis Day at Camp Democracy on the National Mall in Washington, DC. Go to www.campdemocracy.org


Thursday, Sept14,5:30-7:30pm.Tri-state CAN meeting
Downstairs Meeting Room, Greenfield Community College Downtown Office, 270 Main St, Greenfield, MA. Learn what CAN is up to and how you might get involved. We have ongoing efforts to shutdown Vermont Yankee nuclear reactor (just over the border in Vernon, VT). There is much going on! Broader public involvement is essential!

There is sooooooo much going on. It’s our one-year anniversary here at the Enviro Show. HAPPY BIRTHDAY!! Our B-Day present from Glen? PODCAST!! Yes, now you can listen to us drone on ANYTIME! Checkout the link in a few weeks for all the past shows. Jeff Lacy of the Shutesbury Planning Board joined us as we took a look at forest preservation efforts locally. We heard from Thom Hartman on Camp Democracy that begins September 5th in DC. We’re also closing in on a not-so-happy anniversary, that being Hurricane Katrina’s landfall on the Gulf Coast. We had a look at lessons learned (or not learned) from that disaster, but first....

It was Revenge of the Critters time! Rare egg thief discovers the laws of physics! Then: It’s one year since Hurricane Katrina slammed into New Orleans and the Gulf Coast. The aftermath not only left countless people dead, wounded or homeless, it also left a toxic legacy that haunts them still. Getting back to homeless in the Big Easy: Katrina has created the first massive movement of previously predicted climate refugees.

Closer to home, Governor Mitt finally comes up with a plan! Where does he get the energy! Also, one that got D.O. in a lather: Greenpeace stages pro-corporate privatization tour!

"The Trees", by Rush from their live "Different Stages" disc took us to our interview with Jeff Lacy on forest preservation. Then it was on to the....

Tuesday August 22 7 PM , Arms Library, Shelburne Falls, Reel World Film Series’ "PEACEABLE KINGDOM" At a time when the public is more concerned than ever about the health and environmental problems associated with large-scale factory farming, Peaceable Kingdom explores another angle of this unfolding story: the interconnected life journeys of farm animals , former farmers, and animal rescuers struggling against an out of control industrial system

Tuesday August 29 7 PM, "THIRST"
Thirst is an important and timely film vividly illustrating the human costs of commodifying a most basic human right - water. Explores how power, politics and money all contribute to the raging international debate about water policy. Thirst tells a powerful and vital story of resistance and survival.

And, of course, Camp Democracy starts Tuesday, September 5th on the National Mall in DC. Save yourselves! Save the planet! Drive the neocons out of Washington!!

Finally, Friday September 8, 7 PM; House Party, RSVP, Meet the Green-Rainbow candidate for governor: Grace Ross. No matter your gubernatorial choice, this candidate is worth hearing. Her voice is the voice of healthy environments and sustainable economy, health care, small business and so much more that we care about. Call 413-256-1760

We went out with "The End of Summer" (hmmm...) by Dar Williams. That's right campers, summer '06 is almost history. Quick, go swimming!

WHEN IN DOUBT.....CAMP OUT! OCCUPY THE CAPITOL IN SEPTEMBER
THROW OUT THE ENEMIES OF THE EARTH! BRING THE TROOPS HOME!
Posted by D.O. at 5:56 PM No comments:

Our Communities, Our Water

Conference Goals
* To connect grassroots activists and water utility workers to share information on work strategies and activism struggles against municipal water privatization, bottled water campaigns, and bulk exports
* To create understanding of how the links work between local, national & international water privatization.
* To build an understanding of how and where to frame / organize / coordinate around municipal water privatization- given differing international, national, state and local legislations.
* Map out clear action plans for future collaborations and build a regional support network

Visit Mass Global Action for complete details. Do not miss this event.
Posted by D.O. at 3:09 PM No comments: 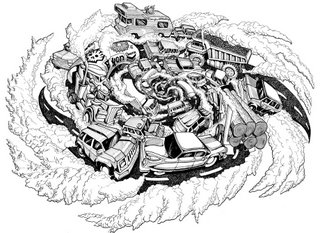 Yes! Car Culture reaps the whirlwind. Here's the word from our friends at the Beehive Design Collective:

"Arf! We've just completed the first, in what we plan to be many,
illustrations on the theme of Climate Change as the beginning of our
collaboration with Rising Tide North America. www.risingtidenorthamerica.org
The image was created as the first of two for use in outreach materials
for the upcoming international Call for Critical Mass rides in
solidarity with the Hurricane Katrina Anniversary on August 25th. It's a Car Culture Hurricane.
All Beehive Graphics are anti-copyright for non-profit use only, if
you'd like to use the image in your work, go right ahead, that's what
it's for! We super appreciate copies of reprints, credit to the
collective, and stories of their use. Please tell us what you think!
pollinators (at) beehivecollective.org

The links below will take you to the image:

We had the elves pry Glen off whatever tree he was hugging up in Maine and return here to the dungeon for more enviro hi-jinx. We fired up the Terra-ist noise machine and burned up some of you far-right lurkers out there with news on so-called "global warming", but first....
We visited The Revenge of the Critters! This one rocked. In fact, it was a summer fishermen’s special: Big Fish Impales Angler! Sorry Charlie, Ian only wants tuna that doesn’t STAB YOU!

In the News: we started out with some positive notes before we completely bummed you out with yet more climate crisis info. Since it’s very clearly summer we talked briefly about summer camp. We’ve been hearing about summer camp vs. wired kids, often leading to what’s been called Nature Deficiet Disorder. We’ll be doing a whole show on that topic soon, but since camp’s still in session now seems a good time to evaluate kids' camp experience and plan for next year. If you know kids who are going to camp with their game-boys, cellphones, i-pods or whatever you might want to tell their parents for next year there are still camps operating in the REAL WORLD (you know, like in the woods!). Checkout local options like http://www.earthworkprograms.com/ or the Hitchcock Center in Amherst.

In terms of good news on the climate front (hmm..),a majority of Massachusetts state senators and reps have signed on to the so-calledGlobal Warming Bill, the end run around our Repugnician gov. The bad news is it died in committee (groan). Hey, it’s Massachusetts, SURPRIZE! Ok, ok, so I said good news: how about this: "Clinton foundation to work to reduce greenhouse gases"? or "Abundant Power from Universal Geothermal Energy"? or "Bio Town aims to run on renewable energy"??. Or, how about taking over Washington in September!! Now, isn’t that better?

"Reap the Whilrwind" by The Reagan Babies, from their Collateral Damage CD took us to the Bad News! Were you thinking the Israeli attack on Lebanon was just about innocent civilians being bombed into oblivion? No! They’re trashing the environment too! Also, You thought (maybe just a teenie-weenie little bit?) that nukes might help in the struggle with the climate crisis? Errrrr! Sorry, there’s the buzzer. the heat wave in Europe is shutting down nuclear power plants!. This could happen to you, USA! There’s more! The Senate votes for more drilling for oil in the Gulf of Mexico. Sorry, no funds for conservation. What? You think these guys are CONSERVATIVES!

On the Bus Stop Billboard:

Next time: Birthday Party!! Don't forget the silly hats! Hey, have you noticed all the Monarch Butterflies lately? THAT is a good thing considering what a beating they're taking in their winter home south of the border. We went out with "Butterfly" by Finish muscian Miriam Stockley, from her "Second Nature" CD.