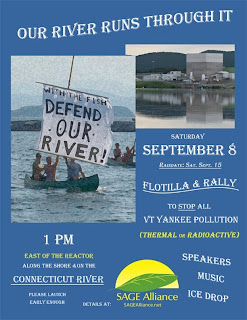 Greetings Earthlings. Last time around we talked about the Connecticut River below the Turners Falls dam and the endangered sturgeon who languish or die there. This time we take you up river to the next damn dam at the VT Yankee nuke where shad have reportedly decreased by 99%, most likely due to heated discharge from the scary old Entergy nuke. Did we mention radioactive leaks? Deb Katz returns to fill us in and invite YOU to take part in Our River Runs Through It: Flotilla and Rally to Stop VT Yankee Pollution  Saturday September 8th  on the Connecticut River. As always we give you latest enviro news in our Echo Chamber and in the E-Valley-uation segment. Also we visit The-Fool-on-the-Hill and hear the Quote of the Week, but first it's time for.........Revenge of the Critters!

In the Enviro Show Echo Chamber we rewind Beyond Nuclear's  telling piece, Nuclear evaporating “like dry ice on a hot day”. Soooo, nukes aren't the solution to the climate crisis after all. Surprise! Speaking of which, the Heart(less)land Institute, that far-right freak show that actually had an office in Northampton some years back, is back at it again in the business of climate change denial. By the way, the climate crisis has always put the lie to the promotion of biomass incineration. Now the Commonwealth of Massachusetts is starting to come around to what we've been saying all along: biomass is NOT green energy.  Note: the operative word "starting"?  Massachusetts Department of Energy Resources Commissioner Mark Sylvia has the caveat:  “Through this regulation and other initiatives, DOER believes there is a role for biomass energy in the Commonwealth focused on high efficiency use of the limited sustainable wood resource.” Yuh. Here's our Enviro Show Blog Bonus: this freak on some lame-ass "reality" TV show said shooting a wolf was "the funniest thing he's done in years". Let's see how funny he thinks it is being called out publicly.  Finally, do we think tar sands oil is the answer to the climate crisis? We don't think so! And yet, the construction on the southern end of the proposed Keystone pipeline has begun.

This week's Fool-on-the-Hill hasn't gotten there yet, but we thought we should prepare you for a rightwing nut-job whose parents actually met while working for Big Oil and while in high school he was part of a group sponsored by the so-called Free Enterprise Institute. With a background like that you can bet soon-to-be Texas Senator, Ted Cruz has picked up some....um...interesting ideas about the planet?

Our very long Enviro Show Quote of the Week is right on target for the show's theme:

"Today, population and development pressures continue against a backdrop of climate change.  Rare species struggle in the face of ill-placed construction.  Nineteenth century sewage treatment remains the norm in some of our cities--chemicals and untreated human waste continue to pour into rivers.  Even in the twenty-first century companies are dumping unduly-warmed effluent and pollutants into the Connecticut to maximize profits; while others concoct schemes to sell off the basin’s precious, clean water for short-term gain.  Stored nuclear fuel at a riverside plant poses questions that as yet remain unanswered.  Non-point source pollution from farms and other operations degrades water quality.  Poorly-stabilized river and stream banks foul downstream habitats with silt.  Miles and miles of new pavement and parking lots rob groundwater “reservoirs” of their filtering and recharge capacities. Dams, big and small—many of them obsolete, remain impassable barriers to the Connecticut River’s migratory fish and a host of aquatic species that require both upstream and downstream habitat access to successfully complete complex life cycles.  Fish passage and migratory populations on the main stem river are again in decline.  Poor oversight and failing fish passage facilities are two controllable factors that need to be addressed."   -  Connecticut River Watershed Council


In our E-Valley-uation this week we take that call from Deb Katz of the Citizens Awareness Network in order to catch evceryone up on the upcoming  Flotilla & Rally to Stop VT Yankee Pollution on Saturday, September 8 at Noon. But first, let's checkout the Connecticut River Watershed Council's thoughts on the subject.

Friday, August 31, 7pm. Friday Night Free Films presents Controlling Interest: the World of the Multinational Corporation . A 1978 look at multinational corporations and the effects of the flow of capital and jobs across borders. 34 years later it's business-as-usual! Screening at the Frances Crowe Community Room, 60 Masonic Street in Northampton. Enter via Woodstar Cafe, at the front of the building. The venue is accessible.

Saturday, September 8, 11:00am to 5:00pm. Our River Runs Through It: Flotilla & Rally to Stop VT Yankee Pollution on the Connecticut River. More info at: http://sagealliance.net/actions/river-9-8-12

Greetings Earthlings. First off: where's our birthday cake??  We're are 7 years old. We must have cake! Speaking of old, did you know that endangered sturgeon that live in the Connecticut River are as old as the dinosaurs? Suppose we told you that these ancient fish are being ground up like hamburger in the turbines of Holyoke Gas and Electric, and the smaller turbines in operation on the Holyoke Canal system, what would you do? Karl Meyer returns to these microphones with the story. Also there's big news in The Enviro Show Echo Chamber and in our E-Valley-uation segment. We visit another Fool-on-the-Hill as well as chckout the Quote of the Week, but first it's time for.....Revenge of the Critters!  Sturgeon fight back in Florida!

In The Enviro Show Echo Chamber the big news comes from General Electric CEO Jeff Immelt who had a rare moment of clarity recently, admitting that: "It's just hard to justify nuclear [power], really hard." Well, yeah! That's what we've been saying.......for 40 years! And this: U.S. Freezes All Nuclear Power Plant Licensing Decisions! Soooooo, how does this effect the ongoing struggle with Entergy at that creepy old nuke up river? Read this. More big news, and this not-so-good from climate guru James Hansen: "Climate change is here and worse than we thought". Sorry, please don't shot the messenger! And this: Warren vs. Brown on the environment. Yes, it even includes Elizabeth Warren's support for Cape Wind: The Right Project in the WRONG PLACE! Brown is opposed to the Big Wind boondoggle, but as far as the rest of the planet goes he's pretty much a threat to life on Earth. The League of Conservation Voters gives him a whopping 22% voting record on the environment compared to Elizabeth Warren's 66% (which isn't all that great either!). Finally, another Enviro Show Blog Bonus: Big Oil set to kill the highly endangered Right Whale? With the blessings of the Department of Interior?? Not if we can help it! The Department of the Interior is proposing seismic testing along the Middle and South Atlantic. Tens of thousands of dolphins and whales will be affected, including endangered right whales, whose only known calving grounds are at the edge of the testing zone. Tell the Secretary of the Interior that we need to protect dolphins and whales in the Atlantic, not drive them away.

In our E-Valley-uation segment there's a bit of good news about Mount Tom: the rock quarry is history.  Speaking of Mt. Tom we have a Blog Bonus Special for you here. Tell the Gov we've had it with old coal burners! Also, the Shut it Down Affinity group does it again! For there 20th No Nukes action they sort of dropped dead in front of VT Yankee (applause!). And since we're talking VT Yankee, how about we all get onboard the upcoming Flotilla? Following up on a previous show: just who killed the Bottle Bill? They have names here and addresses on Google! Drop them a note saying something like "we're not happy!"

This week's Fool-on-the-Hill is Senator Sessions, Repugnican from Alabama. A recent session with Sessions found this remark: "I said the data shows it is not warming to the degree that a lot of people predicted, not close to that much".  Jeez! Wonder where THAT data came from?  We have a video special featuring this Fool.....actually, several of them!

Our Quote of the Week calls for a long trip in the Wayback Machine:

During our interview with Karl we learned about the just released "New WSCS Special Publication on the life history and behaviour of Sturgeons". You can find it by scrolling down at this page at the World Sturgeon Conservation Society. Then it's on to the Bus Stop Billboard:


Wednesday August 15 (Every Wednesday), Noon-1:00pm, JAIL THE BANKSTERS! in front of Bank of America in downtown Amherst. Each week, an ad hoc band of protesters, often with “Fee-Free” lemonade, are saying “Bank of America, Bad for America” and whatever your own clever sign says. If you like public support honking, you’ll hear it here. Info: 413-253-7934


Thursdays, August 16 & 23, 10:30 am – 12:00 pm. Junior Refuge Explorers. Great Falls Discovery Center, Avenue A, Turners Falls.  Each week, there will be hands-on explorations, games, and activities that will allow children to actively learn about the Connecticut River and the many critters that live in its watershed. There is a maximum of 10 children so pre-register early at (413) 863-3221.

Friday, August 17, 6 to 7pm. Come learn about the natural wonders in the Connecticut River Watershed and the poets who have loved them. Hear from poets Emily Dickinson, Wallace Stevens, Frederick Goddard Tuckerman, and more! Great Falls Discovery Center. For more information call (413) 863-3221.

Sunday August 19, 11am.   Marlboro Tech Graduate Center, Brattleboro, VT. SAGE Alliance Spokes Council meeting will include discussion of: a)Flotilla, b) Banner Drop, c) Committee Reports d)Endorsements, e) Other events. There will be Flotilla posters to distribute at the meeting, make sure you get them for your area. Contact: sagealliance.net/contact

Friday, August 31, 7pm. Friday Night Free Films presents Controlling Interest: the World of the Multinational Corporation . A 1978 look at multinational corporations and the effects of the flow of capital and jobs across borders. 34 years later it's business-as-usual! Screening at the Frances Crowe Community Room, 60 Masonic Street in Northampton. Enter via Woodstar Cafe, at the front of the building. The venue is accessible.

Saturday, September 8, 11:00am to 5:00pm. Our River Runs Through It: Flotilla & Rally to Stop VT Yankee Pollution on the Connecticut River. More info at: http://sagealliance.net/actions/river-9-8-12