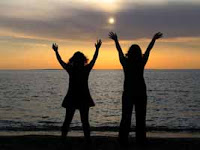 Solstice Greetings Earthlings. It's the longest day and time once again to honor the Earth with a Summer Solstice celebration! Also, Happy Birthday Arky Markham: Summer solstice baby extraordinaire! Mark Maynard of Urban Power USA steps into the studio to talk small wind. We visit the Enviro Show Echo Chamber, revisit the Fool-on-the-Hill and re-meet The New Boss, but first it's time for...Revenge of the Critters! Boating on the Thames this summer? Keep your hands inside the rails!

In the Enviro Show Echo Chamber we find Sea Shepherd freed illegally caught Bluefin Tuna....off the coast of Libya no less! Arab Spring? Spring the Tuna! On the down side, someone on the Cape is shooting listed gray seals. What kind of person does that?? Also: Take Action to save the horseshoe crabs (who aren't crabs at all). And this: Ken has a hissy fit over rainforest destruction. That's an Enviro Show Video Blog Bonus and so is THIS! How about one of the Ten Worst Ideas of 2011: Auzzies kill camels to save the planet? BUT, in our Ten BEST Ideas Dept.: reboot the CCC! Remember our past shows on floating isles of garbage? Will you take the pledge to be part of the solution? Since we're on the Oceana page here, how about speaking up against offshore drilling? Finally, down in South America it's dammed if you do, dammed if you don't!

In our E-Valley-uation segment we ask the musical question: Is the creaky old Vermont Yankee nuke shut down yet? No? But isn't it the same type of nuke as the ones still melting down in Fukushima? While everyone was fixated on Rep. Weiner's weiner, TEPCO announced that the meltdowns probably released more radioactive material into the environment than Chernobyl, making it the worst nuclear accident on record (just like D.O. said it would be). What? You haven't heard about that announcement in the news recently? Gosh, maybe it's not really happening! We checkout Vermont's legal struggle with the Entergy corporados. And, this update on the struggle in Wendell to live off the grid legally (why are we even having that conversation?).

In our Meet the New Boss segment we direct Enviro Show blog readers to Bill McKibben's "Obama Strikes Out on Global Warming" at Mother Jones AND his thoughts on the abusive relationship between O & the enviros at Grist. Goodness gracious, when former nice guy Sunday School teachers like Bill become disillusioned with the Prez....what can we say other than: say hello to the new boss! Why not call Obama to say hello and ask about putting those solar panels back on the White House? While you're at it, why not tell him to STOP SHILLING FOR THE NUCLEAR INDUSTRY!!

This week's Fool-on-the-Hill is House Natural Resources Committee Chair Doc Hastings (a Repugnican, of course). Apparently the doctor is out. He thinks the discovery of one months worth of oil proves we have abundant oil reserves!
Wait,don't you have to go to college for years and years to be a doc? Maybe Doc is also one of the 34% of the U.S. population who say there is no solid evidence of a climate crisis. You want stupid? We've got stupid!. Thanks, Faux "News"!

The King's Drummers at the Stonehenge Summer Solstice event takes us to our Solstice celebration. Then it's off to the Bus Stop Billboard:

Thursday & Friday, June 23-24, 9am. US District Court Hearing - Entergy vs Peter Shumlin et al. US District Court, Brattleboro, VT. Contact CAN: (413) 339-5781 Email: can@nukebusters.org Anti-nuke Vigil 7:30 – 9:00 AM on Thursday & Friday on the sidewalks in front of, and across the street from the Brattleboro Post Office on Main Street. The federal courtroom is upstairs in the Post Office building.

Friday July 8, 2011, deadline for submissions to The Healthy Environment/Healthy Springfield CARE Project. HEHS calls on Springfield’s organizations, churches and groups to submit ideas for an environmental education event that they would be willing to host. The proposed event may be a forum, community dialogue or specific educational presentation. Call 413-794-1803 for application for and guidance.

Monday, July 18 to August 6. Walk for a Nuclear Free World. Starting at the Leverett Peace Pagoda, the walk goes to both Vermont Yankee and the Pilgrim nuke in Plymouth, MA ending at the Grafton, NY pagoda. Call: (413)485-8469.

Friday, July 22 through Sunday, July 24. Clamshell Alliance reunion & resurgence:For rooms, tenting and dining, the World Fellowship can accommodate up to 150 overnight, so reserve soon (www.worldfellowship.org) if you plan to stay over. For information, connection and conversation, join clamshellalliance@yahoo.com, visit the www.clamshellalliance.org website and Facebook at http://facebook.com/ClamshellAlliance.


We go out with "Litha - (Summer Solstice Song)" by Lisa Thiel. It's the Summer Solstice, what better time to listen to your Mother, right?

I took a road trip through Monson and Wilbraham today, towns eastward of Springfield and dead in the pathway of the tornado that tore up parts of western Massachusetts a week ago. I knew I was going to witness a whole lot of devastation going in so I tried to ready myself psychologically for the experience. Guess what? There's no way you can prepare yourself for what you'll see in the wake of a strong tornado. And I only saw a small portion of the destruction. Just imagine what it's like for someone who lives within that path.

In Monson the tornado came pretty much through the town center, taking out church steeples, walls, roofs on the school, stores and homes, trees, fences and whatever else it could tear up. The only thing in my experience I could compare it to was the town of Bluefields, Nicaragua in the wake of Hurricane Joan back in 1988. But Monson isn't the so-called Third World, it only looks like it. I can't even imagine what it felt like last Thursday when the sun rose over what remained. Words like devastation lose their meaning under such circumstances.

Doubling back and driving eastward toward Wilbraham I was again out of the path of the tornado and except for an occasional tree branch, everything appeared pretty much like always. Even as I headed into the town on Springfield Street past shopping centers, gas stations and all the rest, it was business as usual. But then I drove south a few blocks after noting a police chopper hovering out that way and the whole world came to an abrupt change. Given the denser suburban population of this area, block after block of modest single family homes, the destruction was magnified beyond belief. Here, I had absolutely nothing to compare it to. Nothing over twelve feet high remained. Tarps were everywhere, 360 degrees of total desolation. No tree left standing for blocks. Countless homes seemingly beyond repair. Emergency and utility vehicles everywhere. A few blocks north women are going to the tanning salon, guys are having lunch in sports bars. Kafka couldn't write this stuff.

I could go on and on about the contrasts, the seeming lack of connection between one world and the other even though they are all neighbors, just a few blocks apart. But hey, these are just words on a page. We are just that much more removed from neighborhoods where thousands of families live, blasted almost beyond recognition. How do I describe the indescribable? All that pain, all the countless lives, human and non-human, actually terrorized (as opposed to being told you're terrorized) by the massive destruction of their homes. Who can tell that story? 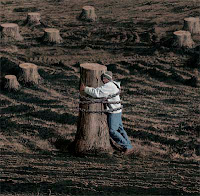 Greetings Earthlings. Are we sick & tired yet of 19th century internal combustion vehicles dictating our infrastructure needs? How about the destruction of scores of trees to make way for roundabouts? It's like a merry-go-round ride made in a little corner of hell and it's round about time we reconsidered our priorities given the oncoming climate crisis. Amherst Tree Warden, Alan Snow and Shade Tree Committee member Hope Crolius join us to talk trees. We checkout some other valley news in our E-Valley-uation segment as well as news from the outside world in our Echo Chamber. How about we see who this week's Fool-on-the-Hill might be? All that and more, but first it's time for... Revenge of the Critters! Golfers beware: trees can ruin your game.

In our E-Valley-uation segment we revisit the chainsaw massacre in the Quabbin just in case you forgot, but Mother Nature delivered her own massacre last week in the form of tornadoes here in Western Mass. See the pics here and here and video here and here. Then ask yourself about so-called weather anomalies and the climate crisis (see Bill McKibben below). We applaud Massachusetts AG, Martha Coakley for backing Vermont's lawsuit against the Nuclear Regulatory Commission (NRC). We wish the nuke-boosters at the NRC would wean themselves of the industry kool-aide and REALLY listen to Arnie Gundersen for once.

This Week's Fool-on-the-Hill is Repugnican congressman Dana Rohrabacher who says since 80 percent of carbon emissions come from decaying plant matter, we should clear-cut rainforests in order to reduce carbon! Whoa! Why didn't WE think of that??

In our Enviro Show Eco Chamber...er...Echo Chamber, we replay Germany's Biggest Anti-nuke action EVER!. And this: McKibben, with tongue uncharacteristically embedded in cheek, nails corporate media and climate crisis deniers on mega-storms. Did someone say tornado? Speaking of massacres, check this out! And for good measure this!

We try once again to air "Earth" by The Green Rockers leading to our interview. Then it's on to the good ol' Bus Stop Billboard:

Wednesday June 8, 10am, Room A-1 at the State House in Boston. The Joint Committee on Telecommunications, Utilities and Energy holds a public hearing on the Muni bill H869. Bill H869 amends a century-old, obsolete State law which gives NStar, Unitil, National
Grid and WMECO a permanent monopoly. We need your help! Go to: http://massmunichoice.org

Wednesday June 8, 7:00 to 10:00 PM. Jazz benefit to raise money for the Pioneer Valley AFL-CIO's charitable organization, the Union Community Fund, to help ease the financial burden on those unfortunate families that suffered life-changing setbacks as a result of the tornados that devastated our region. Montenia's restaurant located at 137 State Street in Springfield. Contact: MarkJazz64@aol.com

Monday, July 18 to August 6. Walk for a Nuclear Free World. Starting at the Leverett Peace Pagoda, the walk goes to both Vermont Yankee and the Pilgrim nuke in Plymouth, MA ending at the Grafton, NY pagoda. Call: (413)485-8469.

Friday, July 22 through Sunday, July 24. Clamshell Alliance reunion & resurgence:For rooms, tenting and dining, the World Fellowship can accommodate up to 150 overnight, so reserve soon (www.worldfellowship.org) if you plan to stay over. For information, connection and conversation, join clamshellalliance@yahoo.com, visit the www.clamshellalliance.org website and Facebook at http://facebook.com/ClamshellAlliance.

We go out with "The Memory of Trees" by Enya; this in memory of all the trees recently killed to make way for yet more humans and their mistaken priorities. Next time it's our Summer Solstice show. Until then remember to listen to your Mother.