Monster from the Deep 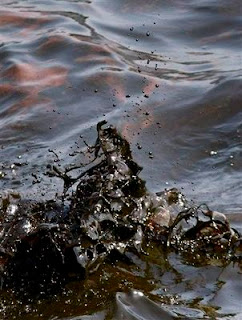 Dark and deep
it grows toward us
changeling, monster
from the Dead Zone
more death and
less life in
the gulf between
the species, crime
genocide monster
shape shifting into
ebb and flow
currents, landfall
from corporate boardrooms
keepers' lair
seemingly sanitized
custodial care in
theoretical ware
bottom-dwelling mind
disregarding caution often
enough to sink us all. 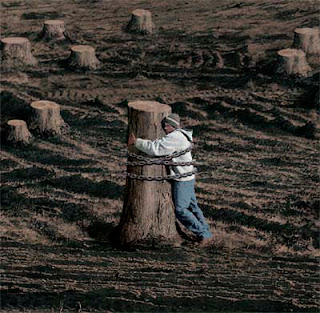 Greetings Earthlings. There's aliens invading the Quabbin watershed! Some invaders have chainsaws, some have tendrils and seeds. Don Wakoluk , former Asst. Forester for the Department of Consternation and Reprobation (DCR) at the Quabbin from 2007 to 2009 joins us in the studio to check that out. Of course, alien clearcuts have been discovered over there as well and we'll check that out in our E-Valley-uation segment. Also, we stagger into the Meet The New Boss segment as well as checkout The Enviro Show Quote of the Week and The Echo Chamber where the BP blowout dominates the news, but first it's time for....Revenge of the Critters! Attack of the Funky shrimp!

The Enviro Show Quote of the Week qualifies as one of the most outrageous yet to come from the ranks of Big Oil:

"The Gulf of Mexico is a very big ocean. The amount of volume of oil and dispersant we are putting into it is tiny in relation to the total water volume."
-Tony Hayward, CEO of British Petroleum

"Oil Slick 1", by Elizabeth Parker takes us to The Enviro Show Echo Chamber where we, quite naturally, rewind some of the news from the Gulf of Mexico on the BP blowout and their attempted cover-up, as well as Ken Salazar's need for a new job, a sort of Event on the Horizon, no? After all, it is the WORST oil spill EVER! For some background on BP and their friends in the Bush regime checkout this report on Democracy Now! For a good overview (and some really creepy images) of what may be well over an 120 million gallon oil spill (and counting) go HERE. Sooo, according to the New York Times: "Shortly after Interior Secretary Ken Salazar proposed reconfiguring [Minerals Management Services], John Goll, the head of the Alaska region, called an “all hands” meeting, according to a staff member there. Afterward, people lingered to eat a cake decorated with the words, “Drill, Baby, Drill.” These are the regulators, yes? If it's any comfort, there ARE actions protesting BP and Big Oil. O by the way, how about sending half a million signatures to to the Prez?

And speaking of The New Boss, it seems scientists down in the Gulf are not terribly pleased with Obama's people at NOAA. Furthermore, it looks like the U.S. Coast Guard is ...err...carrying water? for BP! Speaking of The Times, did we mention Thomas Friedman calling the BP blowout Obama's 9/11? This is under Obama's watch folks!

"Oil Spill Summer" by Butt moves us into our E-Valley-uation segment where Glen gives us a reality tour of the clearcutting around The Quabbin watershed (be sure to bring sunscreen and see sickness medication!). O, did we mention DCR's shiny new biomass incinerator at the Quabbin Visitor's Center? Just another reason to Stop Spewing Carbon!

Then it's on to our interview with Don Wakoluk , former Asst. Forester for the Department of Consternation and Reprobation (DCR) at the Quabbin, followed as always by a perusal of the Bus Stop Billboard:

May 27 - June 6. Mountain Justice Summer Camp. As the campaign to stop all forms of surface mining gains national awareness, we have more and more opportunities for folks to devote a summer of work to stopping mountaintop removal. Go to: http://www.mountainjusticesummer.org/

Wednesday, June 9, 4:30-5:30pm. A rally is planned prior to the Massachusetts DEP hearing on the Global Warming Solutions Act to be held at the Springfield Federal Building, 1550 Main Street in Springfield (outside of Senator Kerry's office). Join a coalition of concerned citizens for Clean Air to let our voices be heard to express opposition to dirty incinerators disguised as clean energy. A coalition of concerned citizens like Stop Toxic Incineration in Springfield (STIS) and Stop Spewing Carbon are sponsoring the event.
More info at: stopspewingcarbon@gmail.com, or call toll-free 1-800-729-1363.


Thursday, June 10, 7 to 8:30 p.m.COYOTES ARE EVERYWHERE! Have you heard their yipping chorus floating through the darkness on a still night? Do you wonder how these animals survive surrounded by our homes and roads? What do they prey on, and who are their predators? Hitchcock Center for the Environment, 525 South Pleasant Street, Amherst. Pre-registration is required; please call (413) 256-6006.

OK, another week in Hell, right? If only everyone would LISTEN TO THEIR MOTHER!! 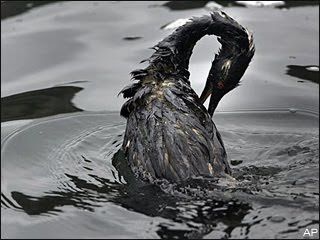 Greetings Earthlings. Happy Air Quality Awareness Week! How's that "Drill, Baby Drill!" working out for 'ya? We'll be looking into some of the slippery characters and their corporado friends responsible for the slippery critters in the unmitigated disaster in the Gulf of Mexico; that during The Enviro Show Echo Chamber. Research professor at the Department of Natural Resources Conservation, UMass Amherst, and leader of the U.S. Geological Survey’s Massachusetts Cooperative Fish and Wildlife Research Unit, Stephen DeStefano joins us to talk about those critters slipping through your yard. His recent book, "Coyote at the Kitchen Door" is making the rounds here in the studio. As usual, we'll delve into some of the local news in our E-Valley-uation segment and do The Enviro Show Quote of the Week, but first it's time for....
Revenge of the Critters! Sea Turtles aren't simply victims of us four-leggeds 'ya know. Tables turned on the little surfer girl!

In the Enviro Show Quote of the Week we turn to Rachel Carson once again:

"It is a curious situation that the sea, from which life first arose, should now be threatened by the activities of one form of that life".

"Beds are Burning" by Midnight Oil takes us to The Enviro Show Echo Chamber where we go straight to Hell via the Gulf of Mexico. Opps! Sorry, wrong Hell. We meant to go HERE. The BP oil well blow-out disaster took the lives of 11 workers, but how many other beings will die? Will the Gulf Deadzone be ....um..deader? What about the effect of all those dispersants? And this: how about MORE OFFSHORE OIL WELLS! No? Then tell Obama to forget oil drilling off our coastlines! And while you're at it go HERE and pledge to boycott BP! Finally, did MMS rubber stamp BP's oil well operation? Would that be the same MMS that rubber stamped the Cape Wind corporate giveaway??

In our E-Valley-uation segment we focus on The Quabbin Walk scheduled for Monday, May 17 to Sunday, May 23. Will you be joining us on the Walk? Up a tree?

Then it's on to our interview with Stephen DeStefano followed by a trip to the Bus Stop Billboard:

Friday, May 14 Day of Action in response to the Gulf Coast oil crisis. The price of burning fossil fuels is too high. From extraction to combustion, the oil industry poisons our communities, destroys ecosystems, and destabilizes the climate. Now is the time to stop offshore drilling dead in its tracks. Take action at: BP gas stations and offices, Federal Buildings or Offices of members of Congress. Go to: http://www.actagainstoil.com/

Monday, May 17 to Sunday, May 23. Beginning in North Orange going eastward toward Petersham and ending in New Salem, the Walk hopes to raise awareness that future survival of life on Earth for all species is being threatened by deforestation all over the planet. Call (413) 522-7505


Friday, May 21st at 7 pm. Financial Crisis, Peak Oil & You, Or How To Build A Lifeboat. Nicole M. Foss, Energy Consultant and Financial Blogger, to Speak at the Unitarian Society of Northampton and Florence, 220 Main St, Northampton. Suggested donation. Call: (413) 268-0068

June 29 – July 6. North Woods Round River Rendezvous! The Earth First! Round River Rendezvous is a week long gathering for anyone interested in or involved in the Earth First! movement. Annually, this week-long gathering is held in a bioregion that is threatened with ecological devastation. And this year, the Maine North Woods is hosting the gathering. Email: maine(a)earth-first.net or call 207-469-2552.


What a week for Mother Earth(groan). Next time it's Forest Forensics with Tom Wessels. Tune in and remember: listen to YOUR Mother!