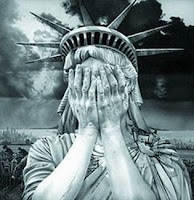 Due to ongoing problems we've had using the new Blogspot format we've pretty much given up and moved over HERE
Posted by D.O. at 7:29 AM No comments:

Now that the presidential election is behind us and all the obscene amounts of corporate money was needlessly spent and all the energy that could have been used to rebuild our crumbling roads and bridges has been wasted, can we come together and clean this place up?  We truly hope you don't continue to carry on about so-called socialists and "apology tours" when we need your help putting the country back together (the country you love so much). We all have been looking at the God-awful pictures of devastation on the east coast, right? How about we roll up our sleeves together and pitch-in? We know you still may think that the Climate Crisis isn't real or that it isn't human-caused, but the mega-storm that destroyed so much of New York and New Jersey was very real and we need to deal with the results, together.  Maybe after we've done all we can to repair the damage we can sit down and have a reasonable discussion about who exactly is promoting the idea that climate change doesn't exist and why they are spending so much more money to spread their highly compromised information. Hey, we'll even pick-up the bar tab!

We're done with celebrating this election now. It's time to get on with the business of putting things back together. We hope you'll join us.

The Vote for the Earth Enviro Show 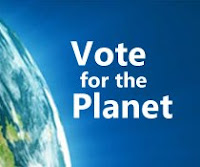 Greetings Earthlings. Here in the Northeastern U.S. we're just catching our breath after yet another "hundred year storm" (with yet another on the way?) and now it's almost Election Day. Of course, on the national level we get to choose between the Green who'll never be elected, the Dem who plays the game to pretty much stay the same, and the Repugnican corporado who will do all he can to destroy the planet once and for all. Great choices, huh? We do have some state and local issues that are interesting.  Johanna Neumann, Regional Director for New England Environment America fills us in. Our roving reporter and strolling troubadour, Tom Neilson also joins us to discuss that and more. As always, we check into The Enviro Show Echo Chamber and our E-Valley-uation segment. We'll see who this week's Fool-on-the-Hill is and maybe Meet the New Boss, but first it's time for...Revenge of the Critters! It's a post-Halloween Revenge from a loyal listener: Bees return awful candy to the humans!

If the polls are still open (or soon to be) when you read this, we may as well do some E-Valley-uation on a few of the ballot questions (that is if we can figure them out). In it's eternal wisdom, the state has taken a page from Kafka and made sure that the referendum numbers change in various Valley towns, as well as making it illegal to name some of the questions. Have fun with that! One of the referendum we call the "Move to Amend" question, says: "Shall the state senator be instructed to vote in favor a  resolution calling upon Congress to propose an amendment to the US Constitution affirming that corporations are not entitled to the constitutional rights of human beings [and that] both Congress and the states may place limits on political contributions and political spending.” Well.......yeah. What have we been talking about here for......ever! Another ballot question may be called the "Budget for All" referendum that you can read about here. It's all about redirecting our tax dollars to sane things like education, health care, renewable energy and transportation, not that too many pols in DC really care about such things. A ballot measure that actually has a name is The Massachusetts "Death with Dignity" Initiative which would establish an "Act Relative to Death with Dignity".  The human-life-is-oh-so-sacred crowd (as opposed to other life forms) is out in the streets about this one. They want us all to hang on to the bitter end no matter the pain and degradation (and maybe give them time to baptize or convert us or God knows what?).  Given that there are far toooooo many people on the planet, we say go for it! Besides, who runs your life anyway??  We'll get into some of the candidates and there positions on the environment as well when we talk with Tom and Johanna.

We're devoting our entire Enviro Show Echo Chamber to the Climate Crisis and it's effect on the Northeast in the wake of Hurricane Sandy.  First, the relief effort. Besides the usual Red Cross and other mainstream groups listed here, there are grassroots efforts like Occupy Sandy, Food Not Bombs, and Sandy's List that are on the ground in the New York metro area providing food, warm clothing and other needs. By now you've all probably seen the photos of the devastation to the infrastructure and people of New York City. This catastrophe, though it is not nearly as devastating as the mega-monsoon flood in Pakistan in 2010 or Katrina's devastation in New Orleans, may well be a, dare we say, bellwether in the desperate need for responding to climate change. Seeing as New York City is the capitol of finance and media for most of the nation, and that the timing of this particular crisis on the eve of a presidential election adds long awaited emphasis to the greater issue of climate, there's an outside chance that climate crisis deniers and the Repugnicans will become as irrelevant as skate keys. In the days following the disaster the corporate media has rediscovered the climate crisis without the obligatory spotlight on flat-earth climate change deniers. Meanwhile, the environment as a whole in the Metro region has been impacted by Sandy as well as various species. They need help too.  A sidebar here: interestingly, part of all that flooding can be attributed to long-ago filled-in swamps, (there were once 300,000 acres of absorbent wetlands, now only 15,500) sort of a Halloween Revenge of the Swamp Thing! Finally, here's our Enviro Show Blog Bonus Special: tell the corporados to pony up for the mega-storm they created.

Our Quote of the Week comes from none other than the Rombot himself: "President Obama promised to slow the rise of the oceans and to heal the planet. My promise is to help you and your family." Sooooo, our family isn't involved in the planet?

Time to visit the Fool-on-the-Hill and guess who's baaaaack? Yes, appropriately it's the chief flat-earth climate crisis denier, Sen. James Inhofe who, upon receiving the Rubber Dodo Award from the Center for Biological Diversity used the occasion to continue his anti-science odyssey into oblivion (but not soon enough for us!). While we're here we have an interesting No Fool: New York City Mayor Bloomberg endorses Obama as the one who can deal best with the Climate Crisis (that is, unless Jill Stein or the Batman are actually available)

Let's Meet the New Boss, whomever that may be. We're praying to the Goddess that it's not the Rombot (who will drive the last few nails into the biosphere's coffin) and since it won't be Jill Stein we are stuck with the present boss who at least has returned to using the C-word (no, not that) and may well set in place some more planet saving programs to...um...stem the tide? Sooo, we're not big fans of The One but we'll fight like hell to keep the Repugs from stealing another election. With that in mind we direct you to No More Stolen Elections where you can join  such eminent progressives as Noam Chomsky, Jill Stein, Thom Hartmann and a whole host of others in pledging to act in the event of another stolen election. FIGHT!

After our interviews it's on to the Bus Stop Billboard:

Thursday, November 8, 7 to 8:30pm. Quebec’s Plan Nord: Towards a New Global Model for Sustainable Development.  Mat Jacobson presents Plan Nord, covering 1.2 million square kilometers of the boreal region of Quebec, the concept has brought together aboriginal and other government leaders, industries, and conservationists to balance economic development with conservation.  Small fee. To register for a current program, contact Jessica Schultz, Center Coordinator, at (413) 256-6006 or jessica@hitchcockcenter.org.

Tuesday, November 13, 7-9 pm.  VERMONT YANKEE MELTDOWN? MORE LESSONS FROM FUKUSHIMA. The third in a series of Community Forums presented by Citizens for Emergency Preparedness.  Speaker:  Arnie Gundersen, a nuclear engineer with 40 years experience who has coordinated safety projects at 70 nuclear power plants.  He has recently returned from Japan with lessons from Fukushima.  Discussion to follow. Contact: Marian Kelner  413-773-8401. All Souls Unitarian Universalist Church, corner of Main and Hope, Greenfield, MA

Friday, November 16, 10:30 to 11:30am. "Gobble, gobble". Have you ever wondered about wild turkeys? Just how did they get associated with Thanksgiving? What do they look like? Where do they spend their winter? What unique behaviors do they have? Young children 3-6 and their parents are invited to explore these questions through story, crafts and games.Great Falls Discovery Center, Avenue A, Turners Falls. Call: (413)863-3221


Now we elect to sign off. Be sure to remember to do what? Right! Listen to your Mother.
Posted by D.O. at 12:58 PM No comments: