The King Coal's Getting His Butt Kicked Enviro Show

Greetings Earthlings. On Sunday, right here in the Happy Valley we took part in the Anti-Coal Protest at Mount Tom. You can read an account of the rally on Peter Vickery's blog here. You've no doubt heard us on past Enviro Shows bad-mouthing that old coal-burning clunker by Mt. Tom in Holyoke, not far over the Northampton line (I-91 and Rts. 5 & 10 pass right by it). According to a press release from Peter Vickery, "the coal-burning Mount Tom power station generates more than one million tons of CO2 annually....which is reason enough to stage a peaceful protest at the GDF Suez-owned plant."

Soooo, we never made it to DC for the Capitol Climate Action but you can read about that big bash on the link below. On with the show! Of course we'll once again point out that burning coal for electricity is a bit like eating junk food for your health. We bring you the sounds of protest from the Capitol Climate Action in DC, as well as a report on the PowerShift09 Conference held prior to the action. As always we'll delve into the Enviro Show Echo Chamber for the news and checkout the Enviro Show Quote of the week, AND some sounds of the Amazon Jean brought back with her, but first it'll be time for.......Revenge of the Critters! Illegal loggers pay the ultimate price! Looks like there really was a tiger in THEIR tank!!

On to the Quote of the Week, this from Gore-al: "If you're a young person looking at the future of this planet and looking at what is being done right now, and not done, I believe we have reached the stage where it is time for civil disobedience to prevent the construction of new coal plants that do not have carbon capture and sequestration"
(timing is everything, yes?).

In the Enviro Show Echo Chamber the New York Times asks the musical question: Is America Ready to Quit Coal?. And this link from Grist: Cap & persuade, the corporados lobby for destroying the planet. Our Enviro Show Blog Bonus? It's Democracy Now! on Greenhouse Emissions Rising at Alarming, Unexpected Rate (we're not the only ones doing doom & gloom!) AND another BONUS!! Prepare to laugh yur' ass off with Clean Coal!

After our interviews with Amherst College students fresh from the action in DC and any random soundbites we may've picked up on the trail, we'll have a look at the Bus Stop Billboard:


Wednesday, March 4, 7pm. GREEN Northampton meeting to discuss the objectives for GREEN Northampton and specifically discuss an action plan for the reduction of the waste stream to the Northampton Landfill and the City's announcement of a citizen's Solid Waste Management Advisory Committee. 102 Bancroft Rd., Northampton (corner of Round Hill Road and Bancroft, near the Clark School).

Sunday March 8, 2-4 pm Citizens Awareness Network Annual Meeting. Media Education Foundation, 60 Masonic St. Northampton, MA. Come to hear about the latest in the fight to close the reactors in the NE. CAN will have a slate of officers and elections! Please let Harvey know if you are attending harvey@nukebusters.org

Monday, March 9, 2009, 6:00 - 9:00 PM. Public Hearing: Vermont Dept of Health - Ionizing and Nonionizing Radiation Controls. Vernon Elementary School, 381 Governor Hunt Road, Vernon, VT. This is a critical and precedent setting issue for citizens living in the reactor sacrifice zone. Vermont Yankee is one of the first reactors up for relicensing that will not have clear sailing. We must not allow Vermont to weaken its radiation protection laws because Entergy wants to continue "business as usual". We will be having a photo shoot in the parking lot at 5:30pm! for more info contact claire chang 413-626-3620 or cchang@nukebusters.org

March 19-22, 2009, Forum on the Solidarity Economy; University of Massachusetts, Amherst. This four day conference will include an inspiring range of solidarity
economy tours, workshops, plenaries and cultural events including issues of sustainability. Go to: www.populareconomics.org

That about does it, campers. We'll be back next time with Stephanie Kraft of The Advocate to exhume that old taboo, Zero Population Growth. Until then remember to LISTEN TO YOUR MOTHER! 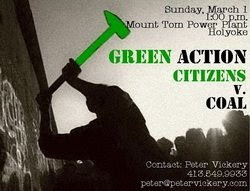 Greetings Earthlings. Now that we're in the Obama Era will Old King Coal still have his way with Washington? Both Obama and Biden support so-called clean coal. Secretary Chu? Not so much. There's been a lot of debate about whether clean coal is possible, or if today's limited funding wouldn't be better directed toward solar, wind, wave and biofuel technology. Alissa Ayden from the Amherst College Responsible Endowment Coalition joins us in the studio. She took part in a student protest at Bank of America in Amherst last November over BOA's support of King Coal. And, another Enviro Show EXCLUSIVE: we air for the first time EVER,on any station anywhere, Tom Neilson's latest tune, "Babies In These Mountains". Tom will call-in from coal country and we may get a call from Peter Vickery as well, concerning a demo at Mt. Tom on March 1st. We'll find more dirt on coal (not too hard, that!) in our Enviro Show Echo Chamber and the E-Valley-uation segments. Also, the Enviro Show Quote of the Week gets us all kinds of weighty in the heart & soul department, and we get a road call from Tom himself, but first it's time for....Revenge of the Critters! It's deja vu all over again! Birds demand airspace and the return of abducted chicks! (this one got pre-empted last time).

Our Enviro Show Quote of the Week comes from the prez:

"The issue of climate change is one that we ignore at our own peril. There may still be disputes about exactly how much we're contributing to the warming of the earth's atmosphere and how much is naturally occurring, but what we can be scientifically certain of is that our continued use of fossil fuels is pushing us to a point of no return. And unless we free ourselves from a dependence on these fossil fuels and chart a new course on energy in this country, we are condemning future generations to global catastrophe." - Barack Obama

In the Enviro Show Echo Chamber we start off with a blog bonus here. And, it's goodnews/bad news on Obama's stimulus package. Also, those tar-sands in Canada we spoke about awhile back are dead ducks, literally! And this: Two more coal burning power plants down the tubes! Wait, did i say two? Make that three!.

The premier radio broadcast of "Babies in These Mountains" with Tom Neilson & Sue Kranz, and Derrik Jordan on fiddle takes us to the newly revived E-Valley-uation Segment of the show where we turn to Alissa Ayden for a students take on Old King Cole and responsible investment.

Finally it's time to scope out the Bus Stop Billboard:

Friday, February 27 - Monday, March 02. Washington, DC. Power Shift 2009 is the second national youth summit to solve the climate crisis. Young people from across the country will take a message of bold, comprehensive and immediate federal climate action to Washington. Go to: http://www.powershift09.org/


March 1, 2009 1:00PM to 3:00PM. Citizens vs. Coal. Mt. Tom Power Plant. Rally to end the deadly use of coal and start building the secure green future!
For more information, visit www.securegreenfuture.org or contact Peter Vickery at 413-549-9933 or peter@petervickery.com.


Monday March 2. Take part in a civil act of civil disobedience outside a coal-fired power plant near Capitol Hill. 1,000 or more people will come to Washington, D.C. to encircle the coal plant that provides power to the U.S. Capitol buildings. There will be many hundreds of young people participating following the conclusion of the PowerShift 09 national conference and lobby action. Also participating will be authors and activists Bill McKibben and Wendell Berry. Go to: www.capitolclimateaction.org.

That about does it for us and Old King Coal (we wish). Jean's in the Amazon listening to her Mother. She'll be back next time with tales to tell. Stay tuned!