The Night of the Living Dread Enviro Show 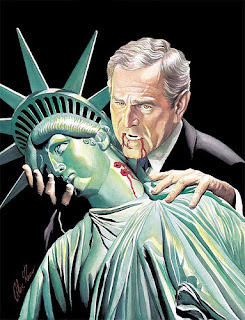 Greetings Earthlings. Yes, we will be live in the studio, but you never know! Vermont Yankee could meltdown anytime; Russia could pre-empt the neocons and launch the nukes; a climate change-induced mega-storm could wreak havoc in the Happy Valley; mutant staph bacteria could rage through town; Gene Tacy could get elected mayor of Northampton! Yes, it’s Halloween eve and we’ve primed the basement sump pump. Who knows what we’ll drag up!! Also, Tamara, the house witch, haunts us once again with tales of the season. Darth Cheney returns to scare the beejesus out of you! But first, it’s time for.......Revenge of the Critters! It’s a scary Halloween special!

There's that horrible theme again! Brrrrr! Glen, save us from the Dark Lord! How much longer must we endure this torture?? Like the latest White House deception on the climate crisis. Checkout our Halloween Blog Bonus: there’s some really scary repugnicians here. Here’s another Halloween Blog Bonus concerning some of those monsters in the White House. AND we have a truly frightening Halloween screed from a group working on depleted uranium weapons issues. We can easily lay that one on the White House doorstep, right? Hey, it’s THEIR war, THEIR watch! Trick or Treat!

A Wahington,DC Indymedia report on last week's No War, No Warming action takes us to the Enviro Show Echo Chamber where Bears invade DC! How about this for scary: Trees with rabbit genes hopping your way! Not scary enough? How about this letter about the Vernon nuke from the Citizens Awareness Network website? AND, this from Grist: UN report says world environment is, well....grim. Finally, bad enough the elephants have to put up with being the Repugnican Party's mascot AND being hounded into extinction, now our own State Rep, Ellen Story is refusing to come to their rescue! Why not let her hear from you?

Our Enviro Show Action Alert finds the Berkeley Tree Sit threatened by a court ruling that could result in a police sweep at any momement. The sitters are trying to protect old-growth oaks being cut down to make way for a $125 million athletic training center (interesting priorities over that UC Berkeley, ey?). Take Action!

We hope to find at least SOMETHING positive in our clips from The Enviro Show Question of the Day. If anyone is left listening after all that scary news they might find some glimmer of hope amongst the people. We taped this last spring in Pulaski Park during some sort of tree-hugging, dirt-worshipping festivity.

Sadly, a special person and true friend of the trees, Ed Cotton, has died. Ed was on the show last summer talking about elms, trees in general and his love of the planet. Let his own words speak for his memory:
"We must preserve this planet for future generations, preserve this miracle that has been provided for us by nature."
Ed Cotton, presente!

Saturday, November 3, 11-12:00pm. Step It Up Northampton. In front of First Churches, located at 129 Main Street in Northampton on the corner of Center Street. Gather together and write postcards to political leaders demanding that they provide leadership and take the bold actions necessary to confront the climate crisis. This event may include dance and musical performances. Volunteers welcome. Call (413)584-1925; Email: stepitupnorthampton@verizon.net

Saturday, November 3, 10:30-12:30, corner of Northampton and South Sts. in Holyoke. Standout for Richard Purcell, who's running for Holyoke City Council in Ward 3. Rich is a Green-Rainbow Chairperson in Hampden County. If you can help, please contact Leslie at 413-522-1559 or at purcellforholyoke@gmail.com

Monday, Nov. 5, 7 to 9pm. An interactive panel discussion on the Bush regime’s recent efforts to brand The Green Scare and the San Francisco 8 defendents as terrorists under the so-called USA PATRIOT Act. The event will take place at Food for Thought Books, 106 N. Pleasant St., Amherst. Call 413-584-3158.

November 16-17 Day of Action Against Coal Finance. RAN, Rising Tide and others are asking anyone and everyone concerned with stopping the US coal rush to join them in taking the message to Wall Street. From flyering and leafletting at your local Bank America branch or ATM, to creative street theater or non-violent direct action at bank offices - help our climate and communities by demanding clean energy! Email dirtymoney@ran.org.


Enough! How much chilling news can a body take?? Happy Halloween every BODY!! And remember: if you're out at night on your bike, wear white and listen to your Mother!

The No War/No Warming Enviro Show

Greetings Earthlings. Happy Blog Action Day (get active!). It's the War against Nature meets the War for Oil on The Enviro Show. Ted Glick, who is on the second month of the Climate Emergency Fast, called in about the upcoming No War, No Warming action in Washington, DC on October 21st and 22nd. Also, Kate Sowder Zalzal, a Masters of Science Candidate at the Umass Climate System Research Center, who is conducting paleoclimate studies in the Canadian High Arctic, joined us to discuss some of the science behind the climate crisis. If you were anywhere near Montague during the show there was a meeting about the corporate threat to our water. Also, we delved into the news on The Enviro Show Echo Chamber, but first it was time for......Revenge of the Critters! Keeping with the military theme: Flipper armed and dangerous!

"Blood for Oil" by Lisa Rhodes and Mary Ann Naz took us to the Enviro Show Echo Chamber. First we gloated over Nestle's bailing from their Montague Plains wildlife refuge aquifer privatization scheme, as reported in the Greenfield Recorder, but don't put away your monkey wrench just yet, they may look for private land to facilitate their theft of the peoples water. Also, we warned you it was coming, now it's official from the BBC: "Warming opens Northwest Passage". Of course the big news last week was Al Gore and the IPCC receiving the Nobel Peace Prize. Run Al, run! But hey, check our Blog Action Day bonus link out: our friends at Rainforest Action Network think Al should get arrested! And this from Grist: Think outside the bottle campaign kicks off! Also, U.S. Interior Department slammed on climate data.

Following our conversation with Ted Glick, we went on to our interview with Kate Sowder. At that point one of our loyal listeners burst into the studio (so much for homeland security) waving around an old folk LP with a song titled "Northwest Passage" by Stan Rogers. We went out on that. What else could we do? She held the album to our heads!

As usual, we checked out the Bus Stop Billboard:

Tuesday, October 16 --Public Meeting on Nestle Corp and the Montague Plains aquifer; 7:00-9:00pm, at the Grange Hall in Montague Center.

Thursday , Oct. 18, 5 PM Wake Up Wal-Mart Rally in response to new reports of lead-laced toys, tainted snacks, poisonous pet food and other products which Wal-Mart is buying from China at low cost. Simultaneous rallies will be held in Springfield, Chicopee, and Westfield. For more info, please contact Tyrone Housey at thousey@ufcw1459.com , call (413) 732-6209 x17, or visit www.wakeupwalmart.com

Friday, October 19. Iraq Moratorium. Wear a black arm band all day to remind yourself and others that the war grinds on and people are dieing. AND take part in a Vigil and demonstration on the corner of State and Main in Northampton at 12:00 noon until 1:00 p.m.


Tuesday, Oct. 23, 11am. Mass. Fish & Wildlife Board Meeting in Northfield. At press time the venue site was yet to be announced but when it is, get there at 10:30 for a vigil in support of the protection of the Montague Aquifer. Stop Nestle’s scheme to privatize the peoples water! Watch www.montagueMA.net for the announcement.

Saturday, October 27, 12 Noon. New England Mobilization to End the war Now! Boston Common. Bus information: From Northampton: Call AFSC at 413-584-8975 or email at afsc@crocker.com to reserve a seat on the coach to the demonstration. From Amherst: Call 413-324-1025. Scholarships are available for those who need them, and we urge those who can’t go to contribute money for scholarships.

Ok, that's it. Next time it's The Night of the Living Dread Enviro Show, a Halloween eve special. Brrrrrrrr...

This life-long visitor and working-class former resident of Cape Cod, Massachusetts has about had it with Cape Wind proponents such as a recent writer to the Martha's Vineyard Times who tried to give readers the impression that the privately-owned industrial wind plant proposed for the public waters of Nantucket Sound has all kinds of support from "union workers" and "fishermen". Driving away from the Cape recently I noticed the proponents even have a bumber sticker now designed to appeal to us workers, further playing the class card and giving the false implication that only wealthy shoreline residents are opposed to Cape Wind. Such disinformation shows just how low Cape Winders will go to push their privatization scheme. They have been using the same corporate tactics used against environmentalists in the past in their effort to silence sincere opposition to the particular sitting of this project.

If Cape Wind proponents would put as much energy into seeking alternative sites for their beloved project as they do misinforming the public, we might be able to reach more agreement on the placement for such power plants.