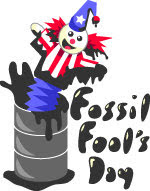 Greetings Earthlings, it’s Fossil Fools Day. Let's see if we can outdo our usual selves foolin' around on the airwaves. Jean’s off to the Everglades (watch out gators!). We're supposed to get a call-in from the folks at Rising Tide fresh from one of the Fossil Fools Day actions and we’ll listen to The Yes Men make fools out of the corporados. As always, we’ll checkout Darth Cheney and the Boy Emperor's latest assault on the planet and listen into the Enviro Show Echo Chamber, as well as hear our newest feature: The Enviro Show Quote of the week, but first it’s time for.....

Revenge of the Critters! Trickster coyotes attack!! Seven people were bitten by coyotes between March and August in the Lake Tahoe area in 1999, including one tourist who was bitten in the thigh while walking in the Caesars Tahoe parking lot over Memorial Day weekend. Airplane flights at the South Lake Tahoe runway had been cancelled or delayed due to coyotes on the airport runway, who have even chased planes as they took off!

Now, for the Quote of the Week. Regarding the recent collapse of a section of the Wilkins Ice Shelf in Antarctica, seven times the size of Manhattan: NSIDC Lead Scientist Ted Scambos, who first spotted the disintegration in March, said, "We believe the Wilkins has been in place for at least a few hundred years. But warm air and exposure to ocean waves are causing a break-up." Hmmm, now about that warm air....

Tom Neilson's "Fools no More" takes us to The Yes Men clip as they get in the corporados collective face (and we use the term "collective" advisedly) and let the chips fall where they may. Then, hopefully, it's on to the Fossil Fools Day Call-in.

There’s that sound again! Let’s see what the Backwards Bush Countdown says. Also this Fossil Fools Day Special: Bush to Phase Out Environment by 2009! AND, Bush sends curt letter to his own EPA crony. No foolin'?

In the Enviro Show Echo Chamber we rerun these from Grist: Pollution is on Vatican's updated list of mortal sins! The Vatican has put a modern twist on the seven deadly sins, announcing a list of "social sins" -- including pollution and genetic manipulation. (And just when we had successfully rid ourselves of lust, gluttony, avarice, sloth, anger, envy, and pride.) The nature of sin itself has changed, says Monsignor Gianfranco Girotti, head of the Vatican body in charge of matters of conscience: "While sin used to concern mostly the individual, today it has mainly a social resonance, due to the phenomenon of globalization." · ALSO: Boston gives new meaning to the term urban decay!

Wednesday, April 2, 6 PM to 8 PM. Public Service Board hearings on Act160 and VT Yankee. A VERY important meeting on Vermont Yankee’s possible relicensing is happening in Brattleboro at the Red Roof Inn, which is near Entergy Headquarters on route 5 leading up to Putney. 978-249-6224.

Tuesday, April 8 at 7:00 pm Nuestras Raices staff will give a presentation called "Connecting Urban People to the Environment" at the Holyoke Heritage State Park Visitor’s Center, 221 Appleton Street, Holyoke. The illustrated talk about community gardening in Holyoke is sponsored by the Valley Environmental Education Collaborative. Admission is free, though a $5.00 donation to support the series is appreciated. For more information call Holyoke Heritage State Park at 413-534-1723.

That about does it. Did we makes fools of ourselves yet? No more so than some!! Joules Graves takes us out (finally!) with "The Land of Fake Fires". Remember: listen to your Mother!

Greetings Earthlings! On this, the birthday of Rudolf Diesel, father of the diesel engine, we look into carbon trading scams as well as the upcoming global actions on Fossil Fuels Day. Speaking of scams, we’ll hear from U.S. Senate candidate, Ed O’Reilly on the fatal flaw in the proposed Cape Wind project. Ed’s lookin’ to displace the junior senator from our fair Commonwealth, the squishy patrician, John Kerry who failed to defend his presidential win in Ohio in ‘04, thus giving us four more years with the criminal Bush regime and the Repugnican Torture Party. As always, we’ll delve into the dark side with Darth Cheney, but first it’s time for.....Revenge of the Critters! Elephants strategize attacks on humans!.

There it is again! The theme from the dark side!! Glen, how many days until we are free? We'll get into yet more examples of THE worst White House occupants in history, such as the Bush regime’s EPA continues dragging its hobnail boots on CO2. And, Ozone rules weakened by boy emperor! ALSO, White House operatives dis wolverines.

"Land of fake fires" by Joules Graves from the album,"Plunge" takes us to our next segment. Sooooo, we’re coming up on Fossil Fools Day, April 1st. Here you can vote for the biggest Fossil Fools on the planet, or you can sit tight 'til Tuesday and let us and Jesse from Rising Tide bend yur’ ear about this upcoming satiric take on a world out of balance. Jesse was part of the Greenwash Guerrilla action at the Point Carbon conference.

Then it's on to...SURPRISE! the Bus Stop Billboard:

Wednesday, March 19, Washington, DC; No War No Warming Green Zone Action. Part of DC actions in observation of the 5th Anniversary of the illegal U.S. invasion of Iraq: Checkout: http://www.nowarnowarming.org/
Also, locally: Vets Speak Out and Vigil on the Amherst Common at 5pm, and a Rally, Vigil, and March in Northampton; City Hall steps at 7pm.


Thursday, March 20; 7-9pm. “The Power of Community”, the story of Cuba's experience with peak oil. The film will be shown at the Greenfield Community Downtown Center near Wilsons on Main Street in Greenfield. Discussion and dialogue will follow.

Friday, March 21 at 12:00 noon. Participate in a worldwide ceremony called the "8,000 Drums" The purpose is to fulfill the OTOMI PROPHECY. The Otomi's are Mayan Olmec and Toltec decendants. The drum will be played so that the Creator will hear us and grant our wishes as we pray for help in the Healing Process of our Mother Earth. All you need to do is play a drum either alone, or with a group. See: http://www.northeastcultural.com/northeastnews.htm


March 30; 3-5pm. Annual CAN meeting. At the Media Education Foundation, Masonic St, Northampton, MA. Get the update on the latest actions and events and news about the fights against nuclear reactors in the NE. Call 413-339-5781.


Tuesday, April 1st; Happy Fossil Fools Day! An action is planned for Boston (What, no action in the Valley?? Come on, people!!). Send an email to: bostonfossilfools@gmail.com

Enough! We'll go out with our favorite anti-Iraq Invasion/Occupation tune,"Out of Iraq" by Simple Fears on this, the 5th anniversary of the Bush regime's illegal and immoral assault on that nation. Time to empty out the White House and, of course, to listen to your Mother!