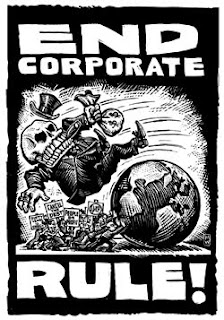 Greetings Earthlings. So, you think the epic labor struggle that began in Madison, Wisconsin is just another union vs. management story? Think again! Corporate America and far-right Repugnican operatives who serve them are literally plotting the final takeover of a country near you! We connect the dots on the show with the help of author and activists, Brian Tokar. Brian will also be speaking Sunday afternoon, March 6, 1pm at a fundraiser for Food for Thought Books in Amherst. Our intrepid roving correspondent and in-house troubadour, Tom Neilson will be on hand as well. More on that later. Those connnected dots will run through all of your favorite segments on The Enviro Show, but first it's time for....Revenge of the Critters! Boris the badger kicks butt! O, and so do the Wisconsin Badgers!

The Enviro Show Quote of the Week comes from our own Rachel Maddow: "If the Democrats do not hold together in Wisconsin, then the place that gave us the weekend, the place that gave us unemployment benefits and worker‘s compensation and the eight-hour workday and the 40-hour workweek, and the nation‘s biggest public workers union and one of the first collective bargaining agreements for those public workers, the state that has seven towns named Union, the state that gave us all of that, the state where the Super Bowl champs are collectively owned—it‘s going to be the start of the end of all of those rights for workers that Wisconsin earned for the country. And it‘s going to be the start of the end of the Democratic Party‘s electoral chances in not just the next election but every election the rest of our life times."

You think this has nothing to do with the environment? Checkout the man behind the curtain! In The Enviro Show Echo Chamber we cut right to the chase in Madison: it's not simply about union busting, about a monstrous power grab and the destruction of the Dems by fascist corporados and their trolls, they also want to privatize state-owned power plants & utilities as well as trash water quality and wetlands while they're at it. Corporate privatization & environmental degradation, who knew! Of course, the Imperial Walker and his Wisconsin State House minions aren't thinking this stuff up on their own. Allow us to illustrate! No, these guys are up to their nostrils in a mongo pile of Koch, brothers (and sisters)! AND, the Koch brothers (big time owners of oil refineries, pipelines, gasoline supply terminals, coal companies, and the Georgia-Pacific Corp!) are up to their eyeballs in climate crisis disinformation.

OK now, the dots from Koch have spilled into our Fool on the Hill segment where we find the Man from Koch (R-Koch), Rep. Mike Pompeo (not to be confused with the doomed town, but doomy enough, thank you), introducing an amendment to sharply cut funding for an EPA program that collects data on greenhouse gas emissions. Soooo, Enviro Show listeners, do we recall who was number 10 on the UMass, Amherst Political Economy Research Institute's Toxic 100 Air Polluters? You guessed it! Koch Industries.

Now, Meet the New Boss: will that hopey changey guy in the White House come to the aid of the workers? How about the planet?? Well, you could petition Obama to oppose a House budget that guts the Environmental Protection Agency and cripples critical public programs, but leaves billions in handouts to the oil companies reporting record profits, but will he (even if you ask nice)? However, please don't interrupt him while he's dancing with the bosses in Ohio. That's the state whose governor Repugnican John Kasich plans to roll back employee pension benefits and collective bargaining rights. The governor who, you may recall, used to be managing director at Lehman Brothers? Surely you haven't forgotten Lehman Brothers! BTW, have you asked yourself if the Wisconsin story is part of a larger trend to make workers pay for an economic downturn caused by Wall St. and deregulators?

Then we have the next big bubble that will put even more of the people in dire straights and impact the biosphere as a result. Word has it that commodities will be the next playground for the banksters and their corporado buddies. Our Enviro Show Blog Bonus takes you to Public Citizen's action page.

Our favorite corporate power song with Noam Chomsky takes us to the Bus Stop Billboard:

Saturday, March 5, 1:00 PM. : Intro to Animal Tracks. Introduction to Animal Tracks and Signs with Naturalist Dawn Ward. Aimed at novice trackers (adults and families with kids age 8 and over), the program will be both indoors at the Leverett Library (exploring Dawn's extensive collection of animal skulls, etc.) and outdoors, weather permitting, searching for tracks and signs. Supported by a grant from the Leverett Cultural Council. Call: (413)548-9343

Monday, March 7, 6:30 pm (snow date: Thu March 10). Exit 19 PAC public meeting. Bridge Street School, Northampton. Do you use the Norwottuck Rail Trail? Do you ride on Bridge St. (Route 9) to and from the trail or the Coolidge Bridge? Do you want to see improved public transit along the Northampton/Hadley/Amherst corridor? Please attend this meeting and share your thoughts. Presentations and reports from the PAC are posted here: http://www.interchange19.org/

Saturday, March 12, all day. The Toxics Action Center Annual Conference* is taking place at Bentley College in Waltham. The Biomass Accountabilty Project is sponsoring a panel discussion, giving us a chance to let others know more about how things have been going for us here in Western Mass. Please consider attending. For information and registration go to http://www.toxicsaction.org/environmental-action-2011. For car pooling, call Janet at (413)625-2886.

Monday, March 14, 7-9 pm. Talk on MA Clean Energy and Climate Plan. 114 Main Street in Greenfield. What is our state government doing to create jobs, keep money in our state,
and improve the environment? Come hear David Cash, Undersecretary for Policy in the Massachusetts Executive Office of Energy and Environmental Affairs, talk about Governor Patrick's vision
of the future, and the nationally-ground-breaking Clean Energy and Climate Plan. For info call: (413)774-5667

And we are out of here, into the streets for the (dare we say?) revolution. See you there and remember to listen to your Mother! 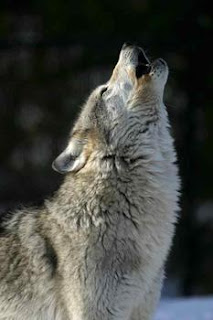 Greetings Earthlings. Did you miss us or didn't you even know we were missing? We've run out of snow days and lame excuses about driving in from the eastern hills in bad weather. Time for Mother to listen to us: the show must go on! We'll talk four-leggeds with Michael Kellett of Restore the North Woods just like we said we would last time (only this time we REALLY mean it!). We'll discuss their North Woods Wolf Recovery Project as well as issues regarding the Canada lynx and Atlantic Salmon. In case you've forgotten the drill, we will also visit the action packed Enviro Show Echo Chamber, our Quote of the Week, our Meet the New Boss and Fool-on-the-Hill segments, but first it's time to FINALLY air that fox story on...Revenge of the Critters!

In The Enviro Show Echo Chamber we've got a two-fer from the Center for Biological diversity. First, the effort to save Grey Wolf from us two-leggeds, then an Enviro Show Blog Bonus. It's a regular potpourri of actions you can take to help save endangered species and wild places. Also, the dreaded White-nose Syndrome continues taking out bats. Now there are reports of it reaching North Carolina and 15 other states from New Hampshire to Oklahoma, and two Canadian provinces. Despite the overwhelming threat to bats from people entering caves, federal land managers across much of the West have failed to enact closures of caves and abandoned mines. Please Take Action to help save the bats. Meanwhile, down in Kentucky coal country it's Day 5 of ongoing actions against mountain top removal. And these reruns: lame-ass Nantucket man busted for dealing in endangered whale parts. And Candy Dynamics of Indianapolis is issuing a recall of all Toxic Waste® brand Nuclear Sludge® Chew Bars,all flavors. Sorry once again kids.

This week it's Fools on the Hill again: Rep. Denny Rehberg, Repugnican from Montana who has introduced bills that would allow states to eliminate all wolves in the Northern Rockies, Great Lakes and Southwest, including the 50 Mexican wolves struggling for survival in New Mexico and Arizona. How about we sink our teeth into this action, huh? O, did we forget to mention Utah's Orin Hatch introduced a bill in the Senate to remove federal protections for all gray wolves in the U.S. also? What's that you say? Orin Hatch is a pompous ass? Really?

Our recycled Quote of the Week comes from Obama's State of the Union address in case you missed it: "I’m asking Congress to eliminate the billions in taxpayer dollars we currently give to oil companies. I don’t know if you’ve noticed, but they’re doing just fine on their own. So instead of subsidizing yesterday’s energy, let’s invest in tomorrow’s"

OK, that's the good news from Obama, on to more bad news in our Meet the New Boss segment: Over the past few weeks, the Obama administration has chosen to approve two biotech crops, Monsanto's Roundup Ready genetically modified alfalfa and Roundup Ready GMO sugar beets. To add insult to injury, the outgoing David Axelrod layed a little pun on his White House cohorts urging everyone to "plow forward" on GE alfalfa. Well, don't just sit there....DO SOMETHING!.

Thursday, February 24 at 7:00pm. Northampton "Coal Country" Screening. Coal Country takes us inside modern coal mining, introducing us to both coal miners and activists. Then learn about the Sierra Club's "Beyond Coal" campaign, which is striving to ensure strong EPA regulations in 2011. Media Education Foundation, 70 Masonic Street (behind the Woodstar Cafe)

Saturday, March 5, 1:00 PM. : Intro to Animal Tracks. Introduction to Animal Tracks and Signs with Naturalist Dawn Ward. Aimed at novice trackers (adults and families with kids age 8 and over), the program will be both indoors at the Leverett Library (exploring Dawn's extensive collection of animal skulls, etc.) and outdoors, weather permitting, searching for tracks and signs. Supported by a grant from the Leverett Cultural Council. Call: (413)548-9343

Soooo, according to this year's imprisoned groundhog hype we're in for an early spring, but you may want to put in a request anyway while you are listening to your Mother, right?