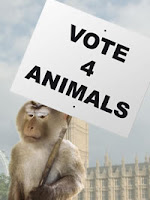 Greetings Earthlings. You think Occupy is the only home of real democracy? Suppose we told you that more than a few critters discovered democracy long before us two-leggeds? Iain Couzin of the Department of Ecology and Evolutionary Biology at Princeton University calls in to talk about what democracy looks like for the rest of us. Also, we delve into the Enviro Show Echo Chamber, Meet the New Boss.....again, as well as our Fool-on-the-Hill and the E-Valley-uation segment, but first it's time for.... Revenge of the Critters! Thanks to Dana for this one: Bull-runners beware of correbous!

In The Enviro Show Echo Chamber we checkout that Ohio gas leak courtesy of Sunoco. Since we're on the subject of irresponsibility how about the folks at the Appalachian Mountain Club and the Audubon Society of New Hampshire shilling for the clearcutters. Also this: an in-depth look into Big Green's dark closet. And this with a WARNING (it's rated R for repulsive): the worst rainforest loggers story ever. D.O.'s memorial piece is here.

In our E-Valley-uation segment they're at it again! Yup, it's the Shut it Down Affinity Group getting into the face of Vermont Yankee, this time in costume! Also, VT Yankee campaign goes national! And this other bit of good news: Springfield Biomass incinerator permit revoked!

It looks like The New Boss may be dropping the ball on habitat destruction. O, and how about protecting our coast lines from oil drilling? Maybe not.

Our Enviro Show Quote of the Week takes us on another journey in the Wayback Machine, all the way back to 1902 with a visit to Petr Kropotkin and his book Mutual Aid:

"In the animal world we have seen that the vast majority of species live in societies, and that they find in association the best arms for the struggle for life"

Our Fool-on-the-Hill this week is one of the biggest fools on The Hill, Repugnican Speaker of the House, John Boehner who invited Big Oil into the House Chamber to hear Obama's State of the Union speech. We don't know why the Speaker bothered, Big Oil is already in the House! Why take up more space?

"Killing Wage" by Congress of Starlings takes us to our interview with interview with Iain Couzin on democracy in the rest of the animal world, then it's on to the Bus Stop Billboard:

Wednesday, February 1, All Day. The Occupy Wall Street OccuBus will be making an outreach trip in a couple of weeks making 14 stops including Northampton on Feb 1! Here’s the trip itinerary: http://bit.ly/y8DrM0. There will be 17 Wall Street Occupiers on the bus. The objective of this trip is to strengthen the OWS network by deepening relationships between occupiers, increase OWS’s capacity through mutual transfer of skills and knowledge, and clarify OWS’s narrative by deepening its commitment to listening. There will be a 6pm event at The Academy of Music. Email: geogruven@gmail.com Go to: http://occupynorthampton.com/

Saturday, February 4, 2PM. Free Pizza And Discussion Of the Pioneer Valley's Energy Future. Join Sierra Club members for free pizza and discussion on how to move the Pioneer Valley away from dirty energy sources and towards a clean energy future. Paisano's Pizza, 136 College Highway, Southampton, MA.


March Month of Action (and beyond) to permanently close Vermont Yankee:
March 3: Greenfield (MA) Community College affinity group is walking from GCC to the reactor, then celebrating in Brattleboro.
March 11: Anniversary of the ongoing Fukushima nuclear meltdowns in Japan, mock evacuation
March 17 & 18: non-violence trainings and/or teach-ins around New England.
March 21: Vermont Yankee retirement party at the Statehouse in Montpelier.
March 22 and thereafter: Non-violent direct actions against Entergy (the New Orleans-based owner of VY). Details to be determined by an AG Spokes Council.
March 23 and thereafter: national call for solidarity in opposition to Vermont Yankee, Pilgrim and Indian Point.
April 1: mass legal rally in Brattleboro in alliance with legislators and environmental and safe energy groups.
Contact tom@clamshellalliance.org or see Upcoming Events on the homepage of www.sagealliance.net for location and on-going action information.

That's all folks!.....O, wait...we nearly forgot to remind you to LISTEN TO YOUR MOTHER!