Taking it to Wal-Mart 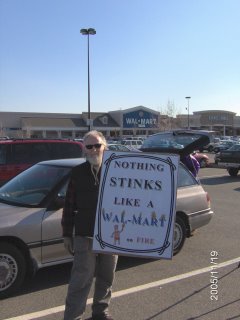 On Saturday about 200 area residents took their struggle against the proposed new super Wal-Mart store in Hadley to Wal-Mart’s door. A rally and informational picket took place at the existing Wal-Mart on Rt.9. As you can see, some unsavory characters were among the crowd (there's something familiar about this particular dirt-worshipper and his message, isn't there?)

The proposed construction of a new Wal-Mart Super store on agricultural and wetlands east and southeast of the Hampshire Mall next door to Target brings new meaning to the term "really stupid". As Aron Goldman, Executive Director of StopSprawlMart noted on our Halloween special a few weeks ago, the new mega-store presents a host of negative impacts associated with sprawl including environmental quality;
local economic health; impact on vibrant downtowns; impacts on traffic, scenic beauty, open space, and agriculture; and harm to overall quality of life. Goldman's concerns are echoed by Hadley Neighbors for Sensible development (though we've yet to see much in the way of sensible development in these parts) whose website claims listed species and their habitat will be drastically effected by the proposed expansion. We'll be looking into that on furure shows.

Meanwhile, back at the demo, Al Norman of Sprawl Busters (who always gets the credit for driving Wal-Mart out of Greenfield nearly single-handedly though we all know Earth First! had a hand in it as well) spoke about the real costs of cheap goods on foreign workers and Wal-Mart’s own employees. Of course, Teamsters also addressed such labor issues and spoke about their problems trying to organize Wal-Mart workers who are payed so poorly that they have to resort to public assistance in order to survive. In addition, issues of women's health and choice were addressed. Wal-Mart pharmacies have refused women access to birth control measures such as the so-called morning after pill.

BTW, upcoming municipal events in Hadley will present additional opportunities for people to voice their concerns about the new Wal-Mart. But you don't have to live in Hadley to be concerned about the new mega-store. Looking at a site plan for the proposed development, it seems obvious that the expansive plan will impact everyone, human and non-human alike in the area with increased traffic, environmental degradation, and added blight to the agricultural landscape. Everyday, new voices are coming out against Wal-Mart. If we can get some endangered turtles or frogs on the show we'll add theirs too. Of course, if you've been listening to The Enviro Show you've heard all this but we're writing it down here to avoid going to work at a real job this morning.