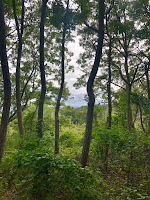 Greetings Earthlings. As you may recall, we've covered the inland pine barrens in the Commonwealth on this show several times in the past. This time we head out to the gateway of Cape Cod, the Town of Wareham in Plymouth County, Massachusetts which is home to the rare habitat of the Atlantic Coast Pine Barrens. We guess, given the challenges faced by our inland pine barrens, that the coastal barrens are threatened as well? Yes, but while government and the academy is mostly the cause of problems here in the hinterlands, commercial development seems to be the big problem out by the coast.  Meg Sheehan returns once again to the show on her work at Community Land and Water Coalition  and this time is accompanied by Frank Mand, Vice President of Southeastern Massachusetts Pine Barrens Alliance; Kathy Pappalardo of the Wareham Land Trust; and Geoffrey Day, Executive Director of the Sea Run Brook Trout Coalition all of whom are defending the Barrens and its critters from The Machine. [UPDATE: checkout our Facebook page for video on this] As always, we will also bring you along to see this week's Fool-on-the-Hill and to do some Decidin' with Biden (wait, how about Abidin' with Biden?) and to remind those who need reminding that "It's the Climate Crisis, Stupid!" but first it's time for.........Revenge of the Critters!  Another listener suggestion: "Man killed by his own rooster during cock fight" ?

This week's Fool-on-the-Hill is Senate Energy and Natural Resources Committee Chairman, Senator Joe Manchin who, it is said: "..is strongly committed to developing a balanced national energy plan that utilizes all of our resources. He believes that a balanced, commonsense approach that considers the needs of our environment and the demands of our economy can and must be developed if we are to achieve energy independence and address the challenges of our changing climate." We guess by "all of our resources" the hack who wrote that is talking about coal, given Joe is the Ol' King Coal of the U.S. Senate? We sure fracked gas, oil & nukes fit in there as well though. "Changing climate" is an interesting term too. Manchin also was one of the few Dems who voted against the $15 minimum wage.

It seems President Biden did some decidin' about Michael S. Regan, the President's choice for Environmental Protection Agency administrator. Regan is African-American so naturally his Senate confirmation isn't coming up any time soon while the party of white supremacy looks for reasons to reject him. The good news is Regan said in the past, "“I don’t see a future in wood pellets,” in 2019 while he was serving as head of North Carolina’s Department of Environmental Quality. “The big thing Michael Regan did here [in North Carolina] was to specifically reject wood pellets and biomass as a pathway for the state’s clean energy future,” Danna Smith, executive director of the North Carolina-based Dogwood Alliance, notes. “He questioned the carbon neutrality, found it to be suspect and said that it should be challenged at the international level. That was a pretty strong statement coming out of a state where the wood pellet industry is ground zero and expanding rapidly." [UPDATE: Reagan is confirmed!] Our friends at Grist are keeping tabs on the Prez and climate issues with this ongoing effort, The First 100.

It's time now to remind those who haven't been paying attention that "It's the Climate Crisis, Stupid!"  Longtime listeners may recall past shows when we talked about climate chaos effects on the Atlantic Meridional Overturning Circulation, or the more folksy term the "Atlantic conveyor belt" that pushes warmer water from the south up our way and folds under colder Arctic water back toward the south. Sad to say, the conveyor belt's in trouble, it's "now moving more slowly than it has in at least 1,600 years. That's the conclusion of a new study published in the journal Nature Geoscience from some of the world's leading experts in this field." And this: Bill McKibben and Elizabeth Kolbert have both been taking another look at atmospheric hacking, classic treat the symptom not the illness geoengineering of our climate. Rather than create more problems by playing at Sky God pumping chemicals skyward, McKibben points out "...if we want to, as a civilization, we can devote the next decade to an all-out effort to transform our energy system. And the Intergovernmental Panel on Climate Change has said that, if we do—if we cut our emissions forty-five per cent from 2010 levels by 2030—then we have a shot at limiting the temperature rise to the 1.5-degrees-Celsius target set in the Paris accord." Sounds like a plan!

OK, after speaking with our guests we head over to the Bus Stop Billboard:

Thursday, March 25, 7:00-8:00pm.  Local Energy Solutions. Episode 1 will lead with a video excerpt from a Naomi Klein speech, followed by panel presentations and a round of questions. In her speech, from a 2014 climate conference, Klein explains how little government has achieved in 30 years due to ideological privatization, deregulation, austerity, and free trade. Register HERE.

Tuesday, March 30, 8-9am.  At our March Sustainable Concord Coffee, Sharon McGregor will explain how Net Zero will get us only so far along the path to climate stabilization. A commitment to achieving Net Carbon Sink, which incorporates and fine-tunes Net Zero as an interim milestone, is necessary to take us the rest of the way in the attainment of both nature and climate renewal… Click here for further information, and to register.

That's all folks but please remember to listen to your Mother, OK?